Early on in the COVID-19 health crisis, as the first cases of coronavirus were confirmed in Australia, its seriousness became clear, and we knew the pandemic would have an impact on everyone across our communities. For us, it was also clear renting households would be particularly vulnerable. In this article, Jemima Mowbray from Tenants’ Union NSW highlights how COVID-19 compounded existing inequalities and problems experienced by renters.

Early on in the COVID-19 health crisis, as the first cases of coronavirus were confirmed in Australia, its seriousness became clear, and we knew this pandemic would have an impact on everyone across our communities. For us, it was also clear renting households would be particularly vulnerable. Many renters work in sectors that were immediately hard hit by the pandemic such as retail, hospitality, tourism, and the tertiary education sector. They are generally more likely to be in casual or otherwise precarious work situations. And their housing, not only unaffordable before the crisis, is also, always insecure.

‘Home’ should be shelter and safe refuge. Sadly, for renters this is not always the case – instead it can be a source of anxiety and uncertainty. The pandemic threw into sharp relief the need for everyone to have access to a safe, secure, affordable ‘home’ – and how badly we’ve failed in achieving this. It made clear the significant role housing plays as a public health and safety measure, and the significant challenges posed for individuals – and communities – when housing is insecure.

How has the pandemic impacted renters?

A recent briefing from the Consumer Policy Research Centre identifies a stark contrast in the experiences and general well-being of renters and those who own their own homes, including those with mortgages during the pandemic. Renting households have experienced much higher levels of financial stress, and they also have not had the same ability to adjust their living arrangements to accommodate the various new challenges COVID-19 threw up for us all – such as family members moving back in, or adjustments required to make ‘working from home’ possible.

The disparity was apparent in the first few weeks of the crisis. Everyone was being told to stay at home and avoid contact as much as possible, while renters were still receiving eviction notices, or facing situations where they had no option but to leave. By the end of March, we were already hearing from people sleeping in their cars because they could not afford to make the rent. The early uncertainty and anxiety among NSW renters was evident in a dramatic spike in visits to the tenants.org.au website. In the first few weeks of the health crisis well over half a million people accessed the Tenants’ Union of NSW COVID-19 Renting Guide. Website sessions seeking information on tenants leaving their tenancy early increased 602%. Visits that sought contact details for local Tenants’ Advice Services increased 900%.

This continued. Our latest data on advice provided (current up to end September) indicates every second renter seeking advice from Tenants’ Advice Services was asking about the end of a tenancy. Around 40% of all private renters who contacted us were having trouble with rent. We know many renting households very quickly built up debt, and were being forced to end their tenancies as a result. Across the Greater Sydney area from April to June the number of renters who lost their bond in full increased by close to 20% over the number who lost their full bond the previous year. This translates into thousands of renting households having to pay out on substantial arrears when they were forced to end their tenancies, or when they were hit with significant end of lease break fees because they ended a fixed term tenancy early.

When the COVID-19 health crisis began we quickly started working with organisations and researchers across Australia in the housing, homelessness and health sectors to highlight how, without adequate protections, evictions would very quickly compound the spread and impact of the health crisis across our communities. The community coalition of over 100 community organisations and housing researchers that emerged from these efforts publicly called on Commonwealth, State and Territory governments to ensure there would be no evictions throughout the pandemic, so everyone could stay safe in their homes.

In response to community concerns, National Cabinet announced an evictions moratorium at the end of March. Each state and territory was tasked with implementing a moratorium in their own jurisdiction. The community coalition then published a statement calling for a minimum standard of measures to be included as part of the moratoriums to protect and support renters. These measures included:

Unfortunately, there were delays in implementation across jurisdictions, and some variation in terms of the protection delivered. No state or territory implemented a moratorium that met all the minimum standards above.

The NSW Evictions Moratorium: what did we ‘win’?

In NSW the state government implemented their moratorium in early April. The NSW Eviction Moratorium measures included an initial 60 day stop on landlords evicting ‘impacted tenants’ for rental arrears, and restrictions on these evictions for a further six months. An ‘impacted tenant’ could only be evicted after the initial ‘stop’ if negotiations between the landlord and tenant to reduce rent failed.

A number of other measures were implemented to support renters including the extension of notice periods for some other evictions; protection against ‘blacklisting’ for ‘impacted tenants’; additional resourcing of Fair Trading and the NSW Civil and Administrative Tribunal (NCAT) to assist in mediation and dispute resolution between landlords and tenants; a one-off funding boost for tenant advocacy services to deal with expected increase in service demand; and, a rent assistance package that closed for applications at the end of June. In addition, land tax relief of up to 25% is being provided to landlords who pass on this discount as a rent reduction (waiver) to impacted tenants.

How effective has the moratorium been?

The moratorium in NSW left many falling through the gaps. Many renting households did not quite meet eligibility criteria because of the complexity of their living or working arrangements, or because they were already experiencing financial hardship prior to the health crisis. This has included self-employed renters or those who work on seasonal contracts, people in shared accommodation arrangements, and low- or no-income households. Renting households in share housing situations often found themselves in the tricky situation of not meeting the eligibility requirements for moratorium protections despite struggling to meet rent. This occurred in share households involving both co-tenancy arrangements and head tenant/sub tenant arrangements, where only one or a small number of tenants had lost income or employment but where their flatmates were not in a position to cover or subsidise their impacted flatmate’s portion of rent. In many share arrangements, one or more impacted tenants moved out, while their remaining flatmates were left to try and cover the full rent for the premises because they were unable to fill the empty room/s.

The moratorium also failed to provide protection from evictions for 'no grounds'. We raised our concerns early that landlords might make use of 'no grounds' evictions as a loophole to evade the requirement to enter into 'good faith' negotiations on rent reduction. Subsequently we, along with the Tenants Advice and Advocacy Services network, have been contacted by a significant number of renters who received a ‘no grounds’ eviction after requesting a rent reduction, and who believe it to be a retaliatory eviction.

The weakness of the rent reduction framework is perhaps the most significant problem with the NSW moratorium. The moratorium failed to build in adequate safeguards or provisions that might address the imbalance of power between tenant and landlord when negotiating.

Many offers from landlords during rent reduction negotiations were for rent deferrals rather than rent waivers. When renters approached their landlord with a request to negotiate a rent reduction, they were being told, ‘Pay what you can and then you can fix it up later’. While landlords may have believed they were ‘doing the right thing’ at the time, this offer was simply one of rent deferral without any clear payment plan or timeframe for payments outlined, or recognition of the hardship this merely delays. 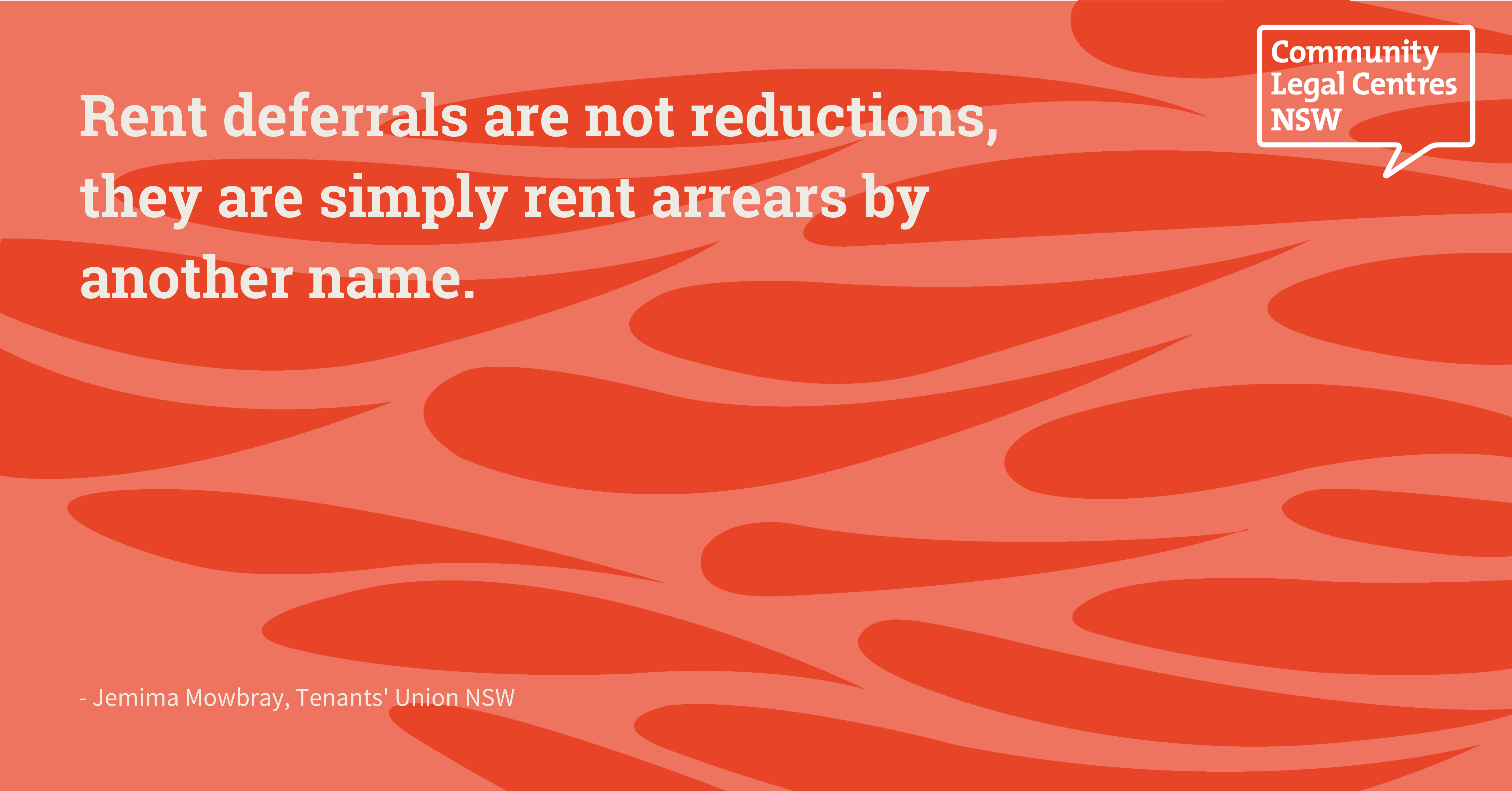 Rent deferrals are not reductions, they are simply rent arrears by another name. Deferred rent is required to be paid at some point and if you do not pay it you risk eviction. Many tenants were not only being offered ‘deferral only’ reductions, but were not being given an opportunity to formally negotiate further. In these circumstances, or where only a small reduction was offered – perhaps because of hardship a landlord was facing – tenants knew they couldn’t afford to continue the tenancy agreement under the offered terms. They knew if they were to stay, they would accrue significant debt and so many ‘chose’ – that is, they were forced – to leave.

Of course, the various problems renters have faced during COVID-19 are not new. COVID-19 simply highlighted and compounded existing inequalities and problems experienced by renters. Most acutely, the problems of housing insecurity, a lack of autonomy in terms of decision making about important aspects of your housing, and a lack of rental housing that is affordable.

Addressing these underlying, continuing issues is something we’ll be working on next year – campaigning to get rid of ‘no grounds’ eviction and improve security for renters, and arguing for significant investment in social housing as part of the NSW government’s efforts to sustain an economic recovery for communities across NSW. The November NSW budget was a missed opportunity in terms of this, but we’ll continue to advocate for a big spend in the next round of budget announcements early next year. We’ll also be focused early in the year on identifying the debt and financial hardship low income households are facing as we emerge from the early stages of the pandemic. Working with others in housing and homeless, but also across the broader consumer protections space, we want to explore what available hardship provisions and/or other appropriate relief is needed to ensure the harm – financial, physical, emotional and social – experienced as a result of COVID-19 does not further entrench disadvantage for renting households who have been impacted going forward. 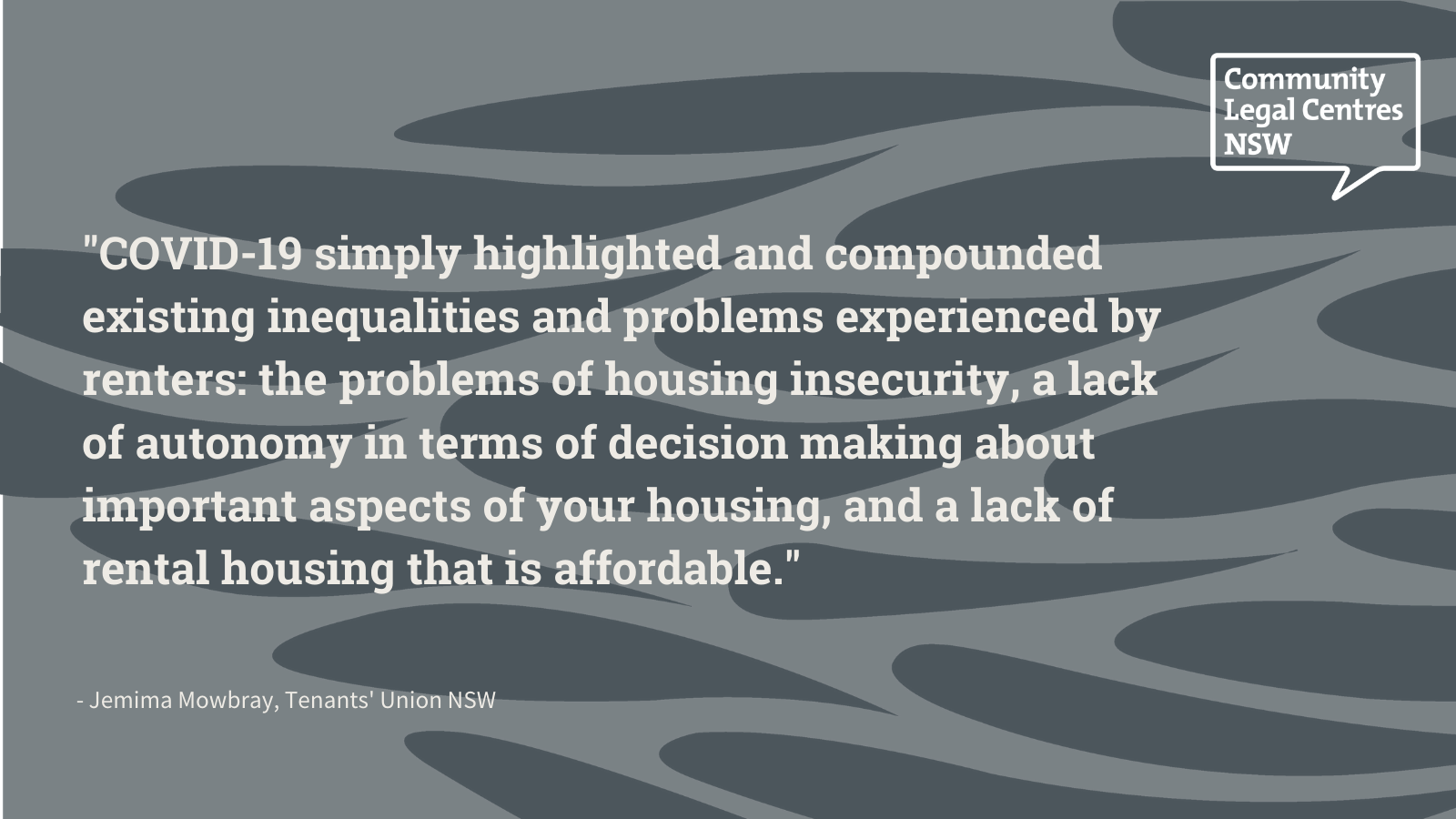