The traditional criminal legal system is failing survivors of sexual violence. Over 2 million women in Australia have experienced sexual violence since the age of 15. Yet very few seek a 'traditional' justice response by reporting to police. In this article, Thea Deakin-Greenwood from Central Tablelands & Blue Mountains Community Legal Centre explores restorative alternatives to current, inadequate responses to sexual, domestic and family violence. 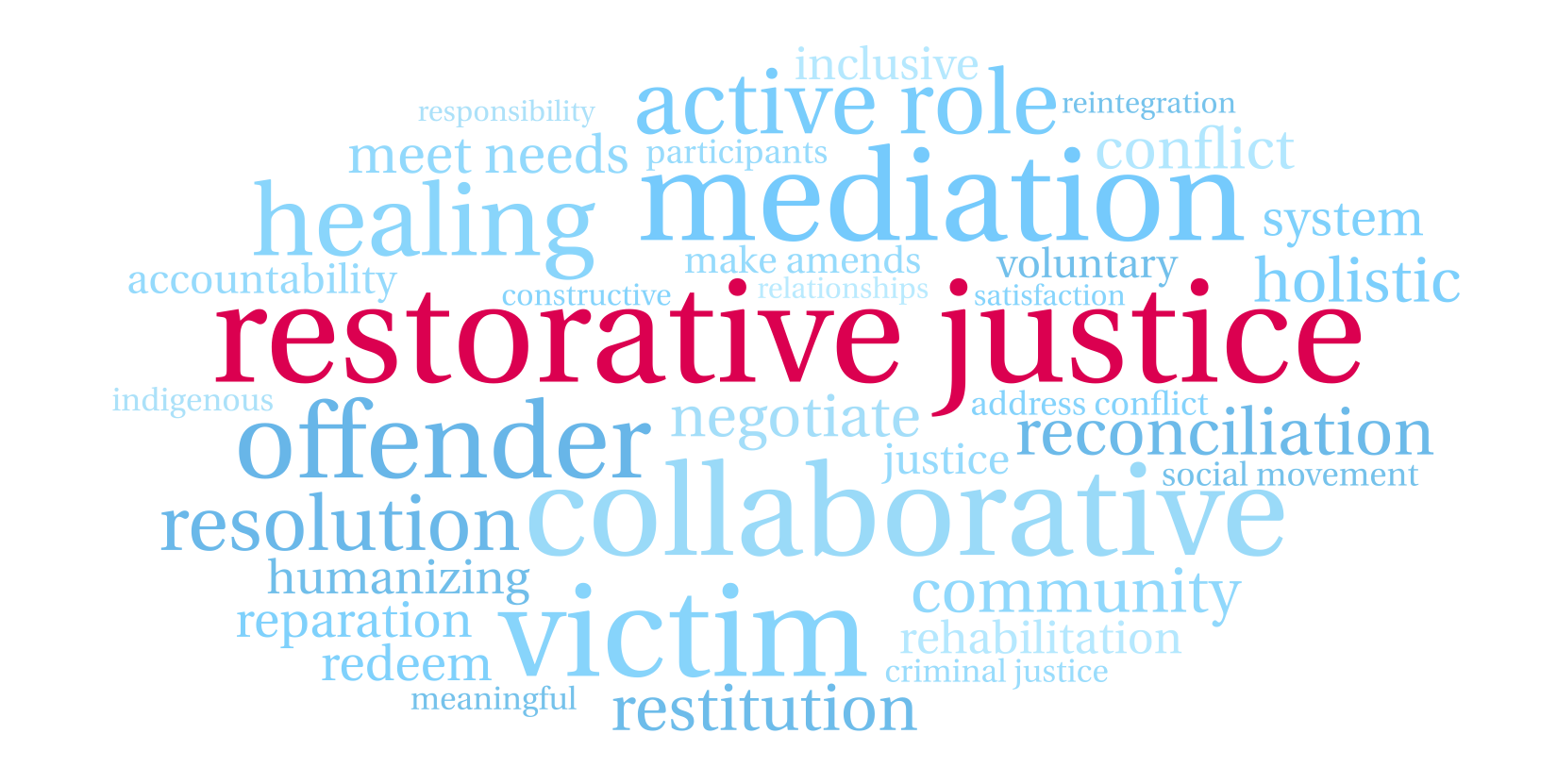 It seems unimaginable that a survivor of sexual assault would wish to face the person who assaulted them ever again. Unimaginable though it is, most people do face their abuser again – sometimes because it is unavoidable and sometimes because they want to. Contact may be unavoidable because the person responsible is a partner, a family friend, or a relation. Sexual assault is most often committed by someone who knows the victim, usually intimately, especially in cases of child sexual assault.

Other people meet their abuser because they want to – they have questions left unanswered, anger left unspoken, blame that needs to be shifted and unmet needs to be addressed. Mechanisms that enable a facilitated conversation between the person harmed and the person responsible can be restorative. While the criminal legal system responds to people responsible for crimes; restorative justice responds to needs of people harmed by those crimes, in ways that traditional systems simply can’t.

The Cicada Project is a collaboration between Central Tablelands and Blue Mountains Community Legal Centre and Dr Jane Bolitho, a criminologist and restorative justice expert from UNSW. It is carving out a new space in the legal landscape by designing a restorative alternative to current, inadequate responses to sexual and domestic violence.

Calculating the actual rate of sexual assault in Australia is almost impossible because survivor disclosure patterns vary widely. For example, a recent report on sexual assault by the Australian Institute of Health and Welfare revealed that almost 2 million Australians had experienced a sexual assault since the age of 15. Of the women who self -reported experiencing sexual assault in the 12 months prior, only one in six sought ‘traditional’ justice by reporting to the police. Only 4 in 10 reported the assault to a health service. The vast majority (over 70%) preferred the support of friends and family. For many reasons, these women felt the traditional reporting pathway and entry in the criminal legal system wasn’t for them.

Despite their prevalence and increased formal reporting rates, sexual offences have the lowest ‘clear up rate’ in the criminal legal system. A report from 2004 [2] estimated that the number of sexual offences reported to police exceeded the number of proven charges by about ten to one. That is, of matters reported to Police, 90% result in no formal justice being done.[3] These figures have been most recently backed up by an ABC News data investigation, which found that in NSW legal action is taken in just 10% of reported cased of sexual assault.

Of course, there are multiple attrition points for matters that are reported to police which enter the criminal legal system. These can include police attitudes towards commencing prosecution, lack of evidence, delays, and the survivor’s willingness to proceed. So even if someone seeks ‘justice’ through traditional pathways, we need to ask: ‘Is our criminal system providing a just outcome for sexual assault survivors?  In what instances and for whom?’

In other jurisdictions, within Australia and internationally, progress has been made to explore meaningful justice for survivors and to advance alternative approaches and responses to sexual and domestic violence. One such approach is to incorporate restorative justice processes and practices in the community and formal justice responses, and to centre these responses on the survivor’s needs.

The United Nations (2002) defines restorative justice in the criminal legal setting as:

any process in which the victim, the offender and/or any other individuals or community members affected by a crime actively participate together in the resolution of matters arising from the crime, often with the help of a fair and impartial third party. [4]

Survivor-focused restorative justice emphasises and prioritises the survivor identifying all the components of harm (physical, social, emotional, material, symbolic or spiritual). Once harms have been articulated, the framework considers what restorative justice options could address all, some, or none of these harms.  Evidence suggests the combination of these restorative justice processes provides survivors with a counterpoint to the loss of power and control inherent in sexual assault.[6] Despite best efforts, this loss of power is also common to many survivors’ experience of current police and court processes.

Survivor-oriented restorative justice processes could be introduced either alongside or outside of the criminal legal systems without the need for legislative reform. For example, restorative processes could be implemented by utilising adjournment provisions and diversion processes such as Youth Justice Conferencing in the children’s jurisdiction. In adult courts, discretion to adjourn matters to enable defendants to participate in treatment or therapy exist currently. This discretionary window could allow referral into a restorative process, which would be strictly consent-based for all participants.

The Cicada Project also supports the introduction of national standards and training and accreditation of practitioners. This would ensure that restorative justice programs can be formally recognised and monitored. It would also bring Australia into line with international best practice.  For example, countries such as New Zealand, the UK and Canada have formal training, mentoring and accreditation schemes for restorative facilitators. These jurisdictions also rely also on the involvement of the community to ensure that restorative justice processes are transparent, and outcomes are owned and supported by those most affected. New Zealand is leading in the restorative justice space, with formal tertiary qualifications and national legislation formalising restorative opportunities within the criminal legal framework and are also available in the community.

The Cicada Project is working to share knowledge about the efficacy of restorative justice that comparable jurisdictions have recognised and applied over many decades and will be delivering specialised sexual violence training to restorative justice practitioners, clinicians and community members later in the year.

Encouragingly, our consultations over the past 18 months have revealed cautious, yet widespread, support for restorative justice as part of the suite of responses available to survivors of sexual assault. This has included in principle support from government, the private sector, NGOs, advocates and stakeholders from both sides of our usually adversarial legal system, as well as members of the judiciary. Health and mental health services that often assist survivors to deal with the impacts of trauma have also expressed support for restorative justice responses to sexual assault. This is key because, although sexual violence is criminalised, it is foremost a societal, health and relational problem, which impacts survivors, their families and communities.

That we need a health-justice response to family and domestic violence and sexual assault is not remarkable. Actioning this with sustained funding is a harder ask. This is particularly so as restrictive funding priorities tend to focus on narrow ministerial priorities, while a response like restorative justice, rightfully straddles multiple portfolios. People dealing with complex issues like the impacts of trauma, don’t simply have ‘legal’ or ‘health’ problems - they just have problems. It’s our responsibility to meet them where they are at, to re-imagine the systems we have made and work collectively to address survivors’ needs holistically, therapeutically and legally. And above all, by being guided by the wishes of the experts, our clients.

Thea is a lawyer who has been practicing in the community sector for over a decade. Her work has mainly been with women and children who are survivors of sexual assault and domestic violence, most recently in connection with the Royal Commission into Institutional Responses to Child Sexual Assault. She is a member of the NSW Sentencing Council, the Corrective Services Ethics Committee and has recently stepped aside from the Corrective Services Women’s Advisory Council. In 2019 she completed a Churchill Fellowship which investigated international programs for victim oriented restorative justice programs.

[4] United Nations, 2002. Basic Principles on the Use of Restorative Justice Programmes in Criminal Matters Article 1 (3).

United Nations, 2006 Basic Principles on the Use of Restorative Justice Programmes in Criminal Matters https://www.unodc.org/pdf/criminal_justice/06-56290_Ebook.pdf