On the bench: COVID-19 and public health fines 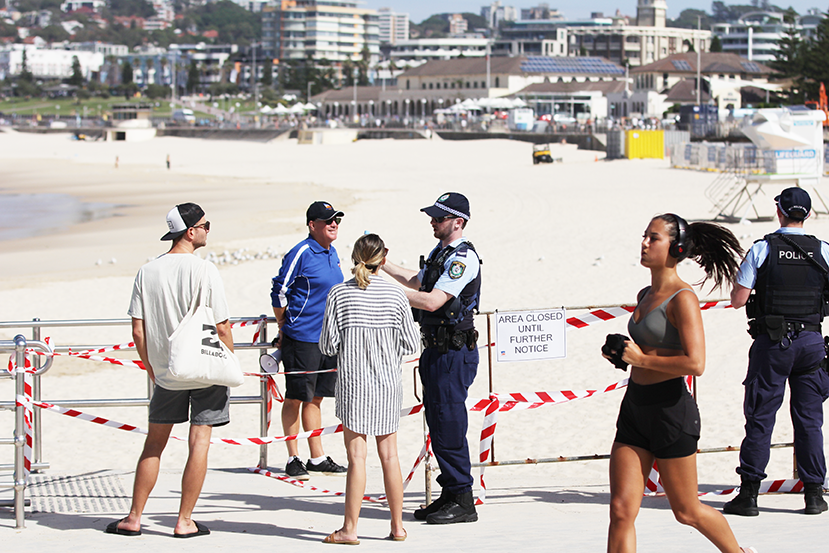 Can I sit on a park bench in the sun?

Last year, I did not imagine this would be a question I would spend any time contemplating, let alone providing legal advice about. But following the introduction of new COVID-19 public health police powers, this seemingly mundane question, along with many others like it, is what I now spend much of my time answering.

In March, New South Wales along with the other states and territories, introduced a raft of new public health orders in response to the coronavirus pandemic. In brief, these orders require individuals to:

Partly as a result of the haste with which these orders have been phased in, there has been an enormous amount of confusion about what they actually mean in practice.

‘Can I visit my parents?’ ‘Will I be fined if more than two people come to my home?’ ‘Am I allowed to see my partner?’

These are the kinds of questions people are now grappling with. In response, Redfern Legal Centre has released a factsheet (view here) to provide clarity where we can.

What it looks like on the ground: recent data

As at 15 April, NSW Police had issued 560 on-the-spot infringement notices – a total of $560,000 in fines. Some initial analysis about where the fines are being handed out is cause for concern.

Journalist Osman Faruqi has broken down NSW police data to reveal that 15 per cent of all fines issued to date have been in three local government areas – Liverpool, Canterbury–Bankstown and Fairfield, areas that represent just 5 per cent of total recorded COVID-19 cases across the state.

Meanwhile, regional towns like Walgett and Bourke, with small populations but high numbers of Aboriginal and Torres Strait Islander people, have seen a comparatively high number of fines issued, even though there have been no cases of coronavirus recorded there.

Faruqi points out that while it appears areas with low to zero coronavirus cases have been hit the hardest when it comes to the policing of these on-the-spot fines, the local government areas of Woollahra, Northern Beaches and Waverley, (which includes Bondi Beach), have received fewer than 1.8 per cent of infringements, despite having recorded 15 per cent of NSW cases.

Lower socioeconomic areas like Liverpool, Bankstown and Canterbury also have higher concentrations of ethnically diverse communities, communities more likely to be disproportionately policed prior to the onset of the coronavirus. The impact on communities already vulnerable to over-policing was a concern raised by Redfern Legal Centre at the outset of these new laws.

Important limitations on new powers should be considered

From the various cases coming forward, another major concern about these new powers is that police are circumventing essential legal thresholds such as reasonable suspicion and onus of proof.

It is important for the public to know that these new powers do not eclipse existing legal thresholds that police are legally required to adhere to. For example, the new powers are very specific and still require police to form reasonable suspicion before approaching and questioning a person about their behaviour.

Another critical aspect of these powers is that they have been implemented to prevent the spread of a disease, not to control or prevent criminal behaviour. These powers are contained within the Public Health Act 2010 implemented by the Minister for Health on the advice of the Chief Health Officer.

The foundation of these powers is important because this should form the basis for when the power to issue an on-the-spot fine is executed. In my opinion, that power should only be executed when a police officer is satisfied that a person’s behaviour is risking the spread of disease to another and blatantly failing to adhere to the public health directions.

Let’s take, for example, the case of Mr George Tomo that was outlined in an article by Michael McGowan, published The Guardian newspaper on 14 April 2020. Mr Tomo had recently lost his job as a lift installer. After spending time on his computer applying for jobs, he decided to go for a drive to purchase a cup of coffee and cigarettes, as he states, ‘to get a bit of sanity’.

After going to the shops, Mr Tomo stopped his car to have a cigarette and watch the Ruby Princess, which was anchored out from Port Kembla. While parked in his car, he was approached by two police officers. The officers decided that by sitting in his car he was in breach of public health directions and issued him with a $1,000 on-the-spot fine.

This case highlights some critical points. Not only did those police officers that issued the fine fail to understand or appreciate the purpose of the laws (i.e. to prevent the spread of disease), they also failed to consider that Mr Tomo had abided by the public health directions by leaving his place of residence for the purpose of shopping. The fact that he stopped in his car after shopping is not a breach of the orders.

The way the New South Wales Orders are drafted only require a person to have a ‘reasonable excuse’ to leave their residence. But the orders do not require, as the Queensland public health orders do, a person to return to their residence once that task has been accomplished. In addition, Mr Tomo was sitting on his own in a car away from other people. He presented no public health danger to others.

Cost of fines a hard hit to the economically vulnerable

Mr Tomo’s case is concerning on many levels, not just because he did not breach the orders, but also because he would find it extremely difficult to be able to pay such a huge fine. The case highlights the enormous problem with fines, which is that they are not means tested and tend to have a much harder impact on people already experiencing vulnerability.

The cost of these fines are at least three times the base weekly amount a person on JobSeeker payment (equivalent to the maximum payment for a single person previously on Newstart) receives and double the amount of many speeding fines. Failure to pay fines is a major factor in entrenching many people in in the criminal justice system, merely because they cannot afford to pay.

It is concerning that police may have been given wide discretion around the issuing of such high fines. In respect of these public health fines, we are yet to see whether NSW Police have been issued with guidelines or Standard Operating Procedures to provide guidance around the application of these new powers, that would inform whether a fine should be issued.

In this time of tremendous uncertainty, overwhelming levels of unemployment and high level of confusion around public health directions, the last thing the community needs is another fine. Instead, this is a time for compassion, for understanding and for clear rigorous guidance to both the public and police. Keeping our community safe should not mean that most vulnerable carry the burden and weight of these complex laws.

And, yes, I am believer that you can sit on a park bench and enjoy the sun, if you have left your place of residence with a ‘reasonable excuse’. There is nothing better for one’s mental health and wellbeing than feeling the autumn sun on your face. I await the opportunity for a court to prove me wrong.