How to identify wage theft, and what to do next

A new Underpayments Advice Clinic at Marrickville Legal Centre is combatting wage theft and helping workers seek justice. We spoke to Lucy Carroll and Jack Ding about what wage theft is, how to identify if you’re being underpaid, and their experience of the first few months of running the clinic. 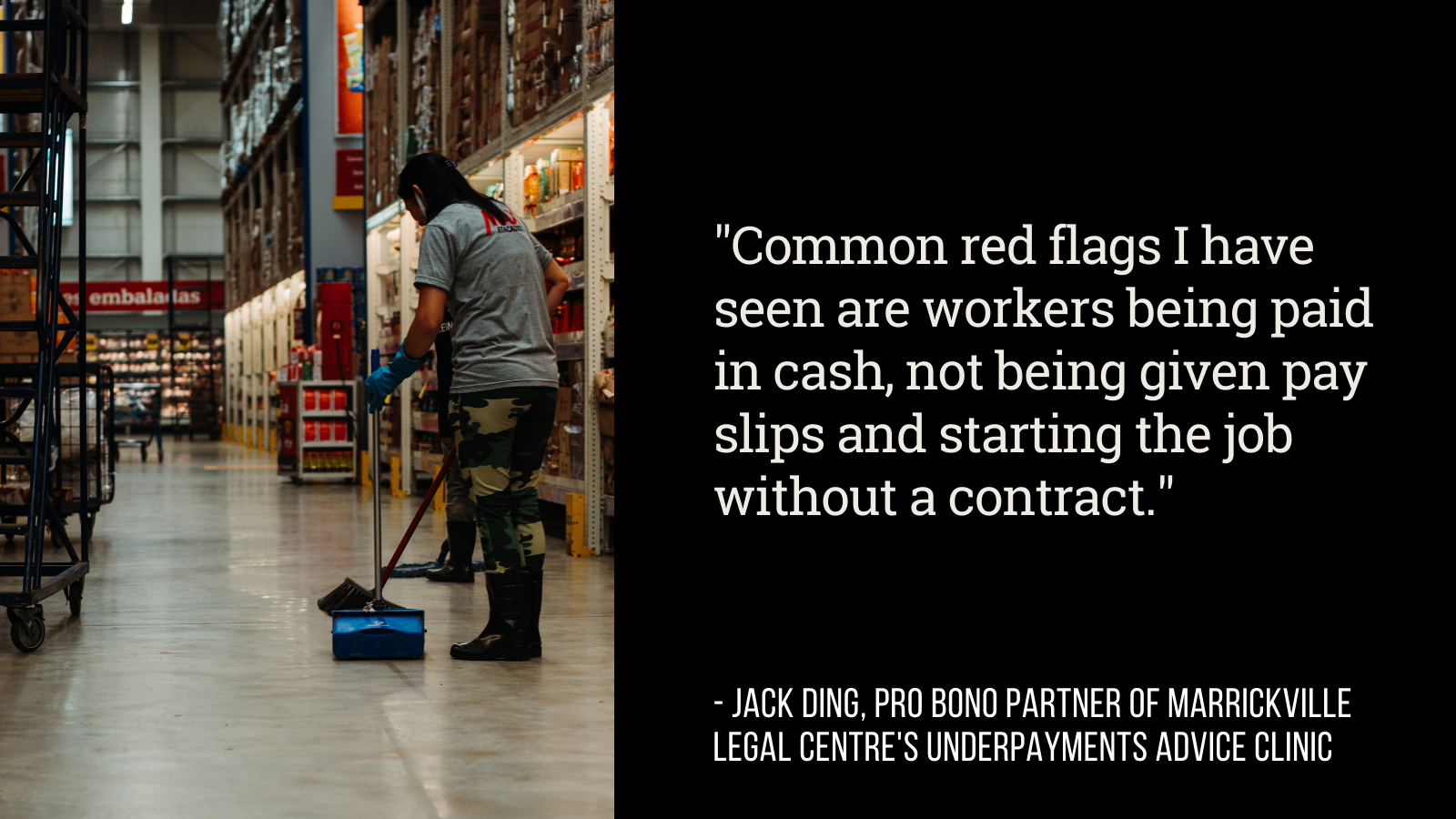 What is wage theft, and which communities and industries does it affect most?

Lucy Carroll: Simply put, wage theft is the underpayment (or non-payment) of wages to an employee. Wage theft occurs when a boss does not pay a worker the correct wages (or does not pay them at all), does not adhere to an applicable Modern Award, or does not pay correct entitlements.

Wage theft is an evolving issue in Australia and is difficult to diagnose until someone makes an enquiry about their wages. We tend to help casual workers, shift workers and migrant workers with underpayment matters. The industries we find where wage theft is most rife are retail, hospitality, and warehouse or factory workers.

Jack Ding: For me, wage theft can significantly affect people’s quality of life. It denies people the rightful wages that they are owed for the time they have worked. Wage theft does not just affect people who have not been paid at all, it also affects people who have been paid short a few dollars an hour, people not getting the right rates for weekend work, and people who are denied access to their leave. Whilst getting a few dollars less an hour might not seem like much, it adds up significantly over months and years. Wage theft has ripple on effects in the community. If people are underpaid, they may not be able to meet their basic needs, or those of their children and families. It is an important social justice issue for our community.

From my experience, I have found wage theft affects retail workers and migrant workers most prevalently. For them, access to justice can sometimes be harder to obtain for various reasons. This could include their English skills, the cost of getting legal assistance, their geographic location, or even cultural attitudes about creating a confrontation.

Wage theft is a complex legal issue that can be hard to diagnose and even harder to fix. What are the key signs that someone is being underpaid? If someone suspects they are being underpaid, what steps can they take?

Lucy Carroll: Common signs of wage theft include workers being paid a flat hourly rate – regardless of the times, total hours or which days of the week they work – and workers being covered by independent contractor agreements. Other signs include incorrect payslips, employers reducing hours on timesheets, being paid cash in hand, and not being paid super. Other warning signs include people working without a contract of employment or letter of offer, or in jobs they found the job on Gumtree, Facebook, or some other social media site.

If someone thinks they are being underpaid, they should start recording the hours they work each week straight away – in their phone, or a notebook.  The Fair Work Ombudsman has developed a very helpful phone app called Record My Hours. Then they should seek free legal advice to work out if they have really been underpaid from Marrickville Legal Centre, peoples’ local community legal centre,  a union, or the Fair Work Ombudsman.

Jack Ding: Common red flags I have seen are workers being paid in cash, not being given pay slips and starting the job without a contract. Workers should not take their circumstances for granted and should investigate further if they have suspicions. It is not a lengthy process to find out your minimum entitlements and there are helpful and easy to use resources on the Fair Work Ombudsman’s website.

It is key that people find out what their minimum rate of pay is, especially when they are working overtime or during the weekend. It is also important people don’t just rely on their employer’s word and check for themselves.

Could you tell us about Marrickville Legal Service’s Underpayments Advice Clinic?

Lucy Carroll: The Underpayment Advice Clinic has been set up to deliver targeted legal advice to vulnerable and migrant workers who are worried about their wages and entitlements. Marrickville Legal Centre has seen an increase in demand for legal advice about wages and entitlements  due to JobKeeper, JobSeeker, mandatory stand downs, and COVID-19 generally. Underpayment matters take a lot of time and resources to work through. Having a dedicated clinic means we can give appropriate advice on what are often quite complex issues.

Jack Ding: The clinic is a partnership between the in-house legal team at Australian Catholic University and Marrickville Legal Centre. We run a fortnightly telephone clinic delivering legal advice on underpayment and employment matters. This is a first of its kind pro-bono project for our in-house legal team. I’ve relished the opportunity to speak directly to people from different backgrounds and walks of life. It has also been really rewarding helping them by equipping them with information and advice about their employment rights.

The clinic launched earlier this year in February. Could you tell us about your experiences in the first few months of running the service?

Jack Ding:  We have had clients from many walks of life and in different stages of employment coming to us for advice. I have really enjoyed working directly with members of the community, talking to them about their lives and helping them through their situation. I am very proud of this partnership, especially because it goes to the heart of the Australian Catholic University’s mission. As a ‘university of service’, we have been making a direct impact on the community that the Marrickville Legal Centre serves.

Lucy Carroll: Marrickville Legal Centre has demonstrated experience in advising on underpayment matters and running them to hearings. We’ve run some large underpayment claims to the Federal Circuit Court and achieved excellent results.

For example, Michele was made redundant without redundancy pay, and had many entitlements that were not paid under the relevant award. Michele had filed an unfair dismissal claim with the Fair Work Commission by herself and was connected to Marrickville Legal Centre by the Fair Work Commission Workplace Advice Service. We advised Michele that her stronger claim was for the non-payment of entitlements and helped her to discontinue her unfair dismissal application and file in the Federal Circuit Court. Michele’s former employer quickly paid her entitlements but insisted on withholding tax. The court decided this was a contravention of the Fair Work Act 2009 (Cth) and fined Michele’s employer $25,460, which was paid to her directly [Bevis v VA Holdings Pty Ltd t/a Granton Homes & Ors [2020] FCCA 2082].

We have used this experience in the Underpayment Advice Clinic, helping many people understand their legal rights at work. So far, we’ve received great feedback about the service. It has been a pleasure working with Jack and teaching him about employment and underpayment issues, while also delivering meaningful services to clients.

Since the clinic launched, the Federal Government has rolled back COVID-19 wage subsidies and social security supports, which have been life saving for so many people. How has the end of these supports impacted people in your community?

Lucy Carroll: The economic impact of COVID-19 has created a new group of economically vulnerable people. Roy Morgan Research commissioned by Good Shepherd tracked close to 6,000 working Australians since April 2020 and found those already on low-to-average incomes were most likely to have suffered negative impacts to their employment due to the pandemic. The research also showed that migrants who had been in Australia less than five years were far more likely to have had their work negatively impacted than longer term migrants and people born in Australia.

The end of JobKeeper and JobSeeker payments has already changed the types of legal advice we are providing to the community. More clients are being unlawfully stood down, having wages cut, and not being paid entitlements. A number of clients have been made redundant since these payments ended.

Lucy Carroll is an Employment Lawyer at Marrickville Legal Centre. Jack Ding is the National Manager of Legal Services at Australian Catholic University.

Do you think you’re not being paid properly? You can make an appointment with your local community legal centre. Marrickville Legal Centre has a dedicated employment law service that you can contact Monday – Friday between 9.30am – 5.00pm. If your matter is suited to the Underpayments Advice Clinic, we will book you in on a Friday between 9am – 1pm. You can contact Marrickville Legal Centre on 02 9559 2899 or submit a web enquiry here.