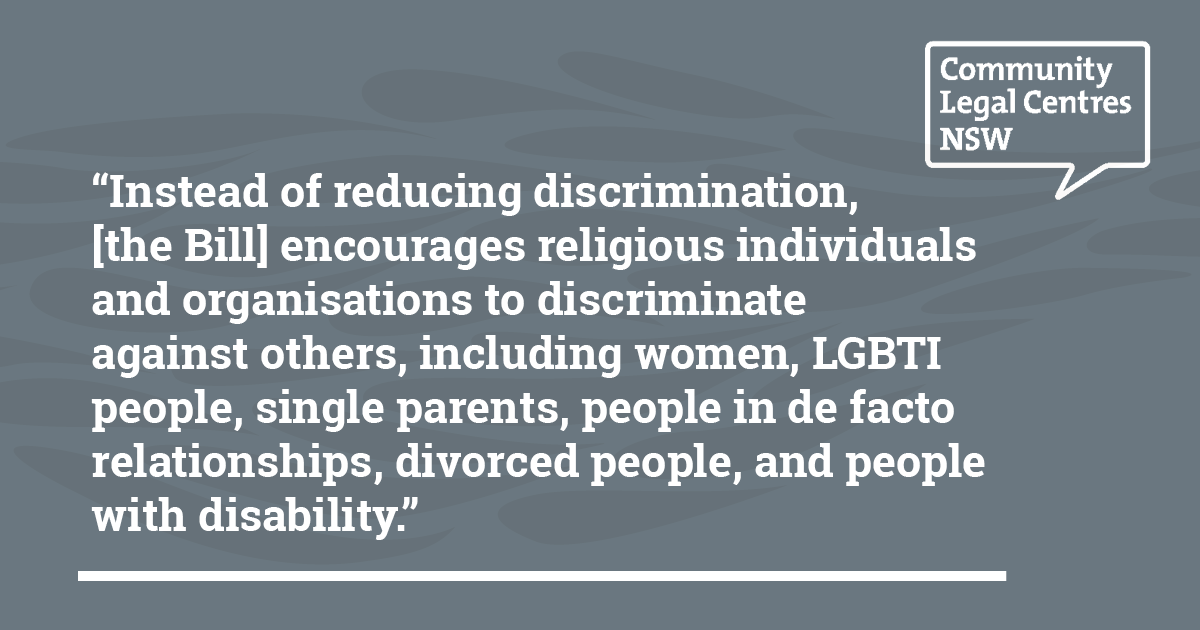 Anti-discrimination laws play a vital role in ensuring people are able to go about their daily lives free from discrimination on the basis of who they are. At the Commonwealth level, these protections are found in the Racial, Sex, Disability and Age Discrimination Acts respectively. In NSW, in the Anti-Discrimination Act 1977.

In this context, most groups who are interested in human rights – including the Public Interest Advocacy Centre (PIAC) – would welcome a Religious Discrimination Bill that genuinely aims to protect people against discrimination because of the faith they share, or because they are agnostic or atheist.

Unfortunately, the Exposure Draft Religious Discrimination Bill released by Attorney-General Christian Porter on 29 August is not such a Bill. Instead of reducing discrimination, it encourages religious individuals and organisations to discriminate against others, including women, LGBTI people, single parents, people in de facto relationships, divorced people, and people with disability.

Statements of belief are written or verbal expressions of a religious view held by a person, made in good faith, and reasonably regarded as being in accordance with the doctrines, tenets, beliefs or teachings of their religion. For example, a person expressing their view, based on their religious belief, that homosexuality is ‘intrinsically disordered’.

The Bill exempts ‘statements of belief’ from all Commonwealth, State and Territory anti-discrimination protections generally (including adverse action protections under the Fair Work Act 2009), Tasmania’s Anti-Discrimination Act 1998 specifically, and any other prescribed law. So, returning to the above example, a person could tell a gay employee, customer, person staying in their Bed’n’Breakfast or even their patient that they are ‘intrinsically disordered’ – and it would not constitute discrimination.

Clause 41 does exclude conduct that is in bad faith, malicious, harassing, vilifying or incites hatred or violence. So, it is unlikely that the person could make that same comment, all day, every day (which is unlikely to happen anyway). However, it will still leave people without protection from a significant range of day-to-day conduct that is demeaning, humiliating, insulting, ridiculing or offensive and may otherwise constitute discrimination.

Consider for example, a male boss who tells a married female employee that wives must always obey the will of their husbands, or a café owner that tells a single mother customer that having a child out of wedlock, and ‘depriving’ the child of a father, is a grave sin. The Bill seeks to protect such statements.

It also represents a radical and unprecedented change to our national anti-discrimination framework, which is based on coexisting, and complementary, laws at the Commonwealth and State/Territory level. This is because the Bill exempts ‘statements of belief’ from all of them.

This approach of complementary laws has enjoyed bipartisan support from successive governments over decades and has allowed gradual improvement in the protection of rights by respecting local variations. For example, the Commonwealth has moved ahead of NSW by protecting people against discrimination based on sexual orientation, gender identity and intersex status – rather than just ‘homosexuality’ and ‘transgender’. On the other hand, NSW protects all LGBTI people against incitement to violence whereas the Commonwealth still doesn’t have any LGBTI vilification protections.

Clause 41 trashes this framework in the interests of a narrow group of people who may wish to express discriminatory views. It must be removed.

Watered down protections against indirect discrimination

As with standard anti-discrimination laws, the Religious Discrimination Bill includes protections against ‘indirect discrimination’ – with a largely standard test of ‘reasonableness’. However, the Bill then messes with this reasonableness test in two distinct, and distinctly unacceptable, ways.

The first way the Bill undermines protections against indirect discrimination is the inclusion of what are known as the ‘Folau’ provisions. These limit the circumstances in which large employers can impose standards of behaviour on their employees. Specifically, large employers will have to demonstrate that compliance with ‘employer conduct rules’ which restrict employees from expressing their religious beliefs outside ordinary work hours is ‘necessary to avoid unjustifiable financial hardship to the employer’.

There is no reason why financial hardship should be the determining factor for large employers seeking to promote values of diversity and inclusion, or to protect their reputation in the community where damage is not easily quantifiable in financial terms. Legitimate considerations of corporate social responsibility go well beyond financial matters and should be relevant to questions of reasonableness.

The test of necessity also sets a very high bar that may impose an impossible burden on employers wishing to set standards that support values like diversity. Before introducing an ‘employer conduct rule’ that applies outside of work, employers will need to undertake complicated and potentially costly attempts to quantify a range of hypothetical circumstances that could have a financial impact on the business. It is difficult, if not impossible, to see how this could be done in practice.

Importantly, if the so-called ‘Folau’ provisions were removed, employees who felt that their ability to manifest their religion was restricted would still be able to argue that a code of conduct constituted indirect discrimination – in a similar way to other discrimination laws. Clauses 8(3) and (4) must be removed.

The second way the Bill undermines protections against indirect discrimination is by making it easier for health practitioners to ‘conscientiously object’ to providing services based on their religious beliefs.

The Bill defines ‘health service’ very broadly. It is not limited to services that could be considered likely to raise ethical issues – for example, relating to abortion (which are often covered by their own conscientious objection laws at the state level). Rather, the provisions apply to services of any kind provided in the practice of a long list of health professions, including occupational therapy, optometry, pharmacy and podiatry.

For the Bill to foresee a role for conscientious objection in the provision of services by an optometrist or podiatrist, for example, suggests these clauses seek to protect the outright refusal of services to people from certain groups. This is inconsistent both with a commitment to non-discrimination in public life, and the legitimate expectation that health practitioners will serve the person in front of them and their health needs.

There is also no evidence that a standard test of reasonableness is unable to resolve potential conflicts between the religious beliefs of health practitioners and rules that may be imposed relating to the provision of health services.

The conscientious objection provisions for health practitioners must be removed.

The fourth main problem with the Religious Discrimination Bill is the general religious exception in clause 10. This grants religious organisations a special privilege to engage in conduct that would otherwise be prohibited under the Bill – for example, allowing religious schools to preference enrolment by students from that faith.

The problem is not so much that such an exception is included, but that it is so broad it will allow an incredibly wide, and unjustifiable, range of discrimination.

For example, it provides that a religious body does not discriminate under the Act if they engage ‘in good faith, in conduct that may reasonably be regarded as being in accordance with’ religious doctrine, tenets, beliefs or teachings [emphasis added].

This is a much easier test to satisfy than the equivalent tests in the general religious exception in the Sex Discrimination Act and Age Discrimination Act, which require that conduct ‘conforms to’ religious doctrine or ‘is necessary to avoid injury to… religious susceptibilities’.

Exclusion clauses in some form are necessary to ensure religious institutions are able to operate in certain circumstances to the exclusion of people who are not of the same religion. However, it is important they are carefully and narrowly defined to avoid unintended consequences and negative impacts on the rights of others.

In this Bill, however, the general religious exemption is not limited to bodies established for a religious purpose. It will apply to any educational institution, registered charity or ‘other body’ (other than a body that engages solely or primarily in commercial activities) that is conducted in accordance with the doctrines, tenet, beliefs or teachings of a particular religion. The inclusion of ‘other bodies’ in the clause gives it an excessively broad scope.

It is particularly concerning that the exemption will apply to religious schools, allowing them to disadvantage or expel students on religious grounds. For example, if a student decides in the course of their schooling that they no longer share the faith of the religious body, but nevertheless wish to complete their education in the school.

This is contrary to the approach taken in Queensland, Tasmania, the ACT and the Northern Territory, where schools can refuse to enrol a student on religious grounds but can’t discriminate against them once they have been enrolled. The approach in those jurisdictions strikes an appropriate balance between the needs of schools and students and recognises the special vulnerability of children.

Overall, the general religious exemption must be amended to ensure it:

Where to from here?

As the Government considers the responses to its draft Bill, we must hope they will listen to the criticisms expressed by civil society during the public consultation process, including PIAC, the Human Rights Law Centre, Equality Australia and by the Australian Human Rights Commission (the body which would be responsible for implementing the new laws), and redraft the Bill accordingly. In short, they need to choose what kind of legislation they want:

We believe the Exposure Draft is not the law we need, nor the law we were promised.

Based on what type of Bill the Government introduces to Parliament, the next step will be how the Opposition, Greens, and Cross-Bench (including the Centre Alliance and Senator Lambie) respond.

Given current Senate numbers, it will be very difficult to pass amendments to the Bill once it is introduced. But it is possible for that ‘coalition’ (Labor, Greens, Centre Alliance and Lambie) to vote it down.

If the Government were to introduce a Bill that looks a lot like the Exposure Draft they released in August, that is exactly what the Senate should do. Because it would be the wrong Religious Discrimination Bill. And it should be rejected until we get the law we need: a law that ensures the rights of all are respected and protected.

Update: On 30 November 2019, Prime Minister Morrison announced the Government would not introduce the Religious Discrimination Bill into Parliament this year, but would instead release another exposure draft version of the legislation. Public consultation on the Bill is expected to continue over summer.