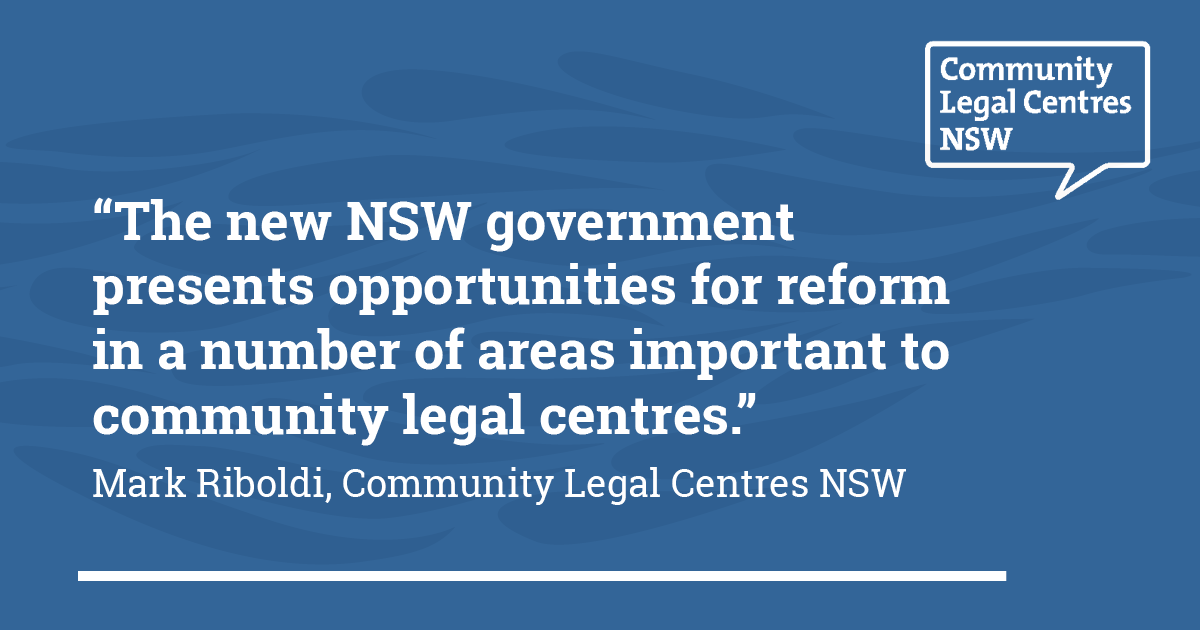 In this article, Community Legal Centres NSW's Mark Riboldi unpacks the 2019 NSW Election outcome and what it means for the community legal sector.

The NSW electorate returned Gladys Berejiklian as Premier of NSW, the first woman to be popularly elected as Premier. That’s certainly an achievement, but not necessarily of benefit to the women of NSW. During the campaign the government failed to make any significant commitments regarding domestic violence funding or even symbolically join Our Watch, and the significant lack of women in cabinet is cause for concern.

Despite polling suggesting that a minority government was on the cards, the coalition retained a majority, albeit reduced to a very small one. The major losers were the National Party, who lost seats to the Shooters, Fishers and Farmers Party in seats along the Murray Darling, and Lismore on the NSW north coast to Labor.

Because of this slim majority the government will want to maintain decent relationships with the nine crossbench MPs in the lower house: three Greens; three Shooters, Fishers & Farmers; and three independents. One by-election loss or rogue LNP backbencher and the Berejiklian government will need to negotiate confidence, supply and all legislation in both houses.

The full make-up of the upper house  won’t be known until April 12, when final preferences for the ‘big ballot paper’ are distributed. At this stage the only thing that's 100% clear is that the government will need a hodgepodge of crossbench votes to pass any legislation opposed by the Labor Opposition.

In contrast to the previous four years, where the government needed only 2 upper house votes and largely relied on the Christian Democratic Party to govern, this time they will likely need five. This means they can either:

This may look chaotic, but it is potentially a good sign for progressive reform in areas such as arts and creative culture, animal welfare, justice, and the environment. The need to deal with multiple micro-right parties all demanding a furthering of their own fringe issues will slow down the government's agenda.

The Shooters, Fishers & Farmers MPs in the lower house are likely to want action of water security in the Murray Darling basin; further, one of them is vegetarian and another opposes a proposed coal mine - these contradictions may result either in a split in the party, or a broader agenda than just relaxing gun control laws. There's also the tension between them and the Nationals on the ground and with the Liberals over gun laws. This conflict over gun laws extends to One Nation (though if Mark Latham remains aligned to Pauline Hanson for more than 6 months there will be many people eating their hats) and also to David Leyonhjelm if he gets elected.

Sustainable Australia are regarded as being anti-immigration, which in state politics largely translates into concerns about planning over-development and insufficient infrastructure. Concerns on these state issues are shared by the Greens, albeit coming from a different ideological position.

Keep Sydney Open and Animal Justice Party are regarded as progressive but they're certainly closer to the centre than the Greens and have limited policy interests. It will be interesting to see whether these parties approach legislation broadly on principle - their voters almost certainly hold Labor/Greens values - or if they go down the pragmatic path micro-right parties traditionally pursue. If Tyson Koh from Keep Sydney Open gets a seat, a relaxing of Sydney's 'lock out' laws could well be on the cards and deliver the government a more stable crossbench partner.

Most commentators agree that the election campaign didn’t really hit high salience until the final week. This is possibly due to all the federal shenanigans, as well as the difficulties NSW Labor faced trying to differentiate themselves substantially from a moderate Coalition government willing to talk big on health and education. The electorate has likely also not forgotten how on-the-nose NSW Labor was when they were barrelled out of government in 2011.

Labor  had a particularly bad final week, with the Liberal/National tactical team finally releasing racist comments made by Labor leader Michael Daley in 2018. The timing couldn't have been better for the government - a king hit on a little known Labor leader just when undecided voters were starting to pay attention. If it had happened a week or two earlier, Daley and Labor may have been able to respond and maybe inroads. Even without this, Daley and Labor faced a tough task from the outset, trying to present a cohesive platform in a short period of time after former leader Luke Foley’s late-2018 resignation following serious allegations of sexual harassment.

There is sadly very little gender diversity in the cabinet, which was announced over the weekend. Mark Speakman has retained the Attorney General portfolio and is now also the Minister for the Prevention of Domestic Violence. Family and Community Services – Pru Goward’s other old portfolio area – has gone to Gareth Ward, Member for Kiama, along with Disability Services.

Mark Speakman remaining Attorney General is good news for the community law sector, as we have an established and respectful relationship with his office. The absence of ‘law and order’ as an election issue can also likely be put down to his influence, and having some degree of consensus with Labor and the Greens that talking about complex justice issues in an election campaign rarely ends well for good public policy. Having Speakman as Minister for the Prevention of Domestic Violence is also a positive, an improvement on Pru Goward who advocates reportedly found difficult to engage constructively with.

What does it all mean for the sector and our priorities?

The election result will be disappointing for anyone whose theory of change relies of getting Labor elected to government. The counter view is that the inability of NSW Labor to present a vision that appeals to the electorate shows they are not ready to govern. Either way, the results are in, we have a Liberal/National government for up to four years. We could put all our hopes in Labor forming government in 2023 and then implementing the reforms we want, or we can take the opportunity to influence and engage with a ‘moderate’ Liberal government where we can.

Realistically, the new NSW government presents opportunities for reform in a number of areas important to community legal centres.

Mark Speakman continuing as Attorney General should continue the program of reform which began with stepping in to ‘save’ our sector from federal funding cuts as his first action as minister in 2017. Speakman clearly understands the value of legal assistance and other early support services for keeping people out of the criminal justice system in the first place, as well as preventing other social problems that result from escalating legal issues. He and other government ministers have also been supportive of Just Reinvest NSW, which operates on a similar principle and, importantly, is an Aboriginal-led initiative.

Domestic and family violence advocates should have an easier time having constructive conversations with Speakman than they did with the previous Minister. It’s too early to tell whether Gareth Ward will be similarly open to consultation in the area of child protection. At the very least, the much-criticised amendments to the Act in late-2018 were not his initiative, so he may be open to sensible amendments.

This is true generally for new ministers, who won’t necessarily be bound by ideology or ego to the actions of their predecessors. This gives opportunities to build new relationships and present constructive reforms in areas such as policing, corrective services and renters’ rights.

A real advantage of ‘law and order’ being off the agenda during the election campaign is that the government hasn’t made a bunch of promises which would take things backwards. This is a positive development from both the government and the opposition. Justice issues in election campaigns tend to be oversimplified by politicians and media in search of quick headlines, knee-jerk responses and swing votes. That means the status quo is largely where it was before the campaign began.

If this hasn't sufficiently wet your psephological whistle, you might want to check out: