After six official insurance catastrophes in five months, decisive action by Australian governments to implement long-term policy reforms in home insurance is long overdue. With serious weather events predicted to be more frequent and more intense as climate change progresses, the need for these reforms is now more urgent than ever.

The recent bushfire crisis may have been unprecedented, but the plight of many affected people who find themselves uninsured or underinsured is not. We can recall the 2003 Canberra fires, the 2009 Black Saturday fires in Victoria, the 2011 floods in Brisbane and South East Queensland, the 2013 Blue Mountains bushfires and various cyclones across Northern Australia. Every time we have a significant catastrophe, we discover that Australians have been left exposed to significant losses above and beyond their level of insurance.

Financial Rights Legal Centre has been advising people through our Insurance Law Service and the National Debt Helpline about myriad issues arising from the recent bushfires. It is early days yet, so many of the calls to our service relate to disputes over temporary accommodation, immediate financial problems, or whether an excess should be paid. 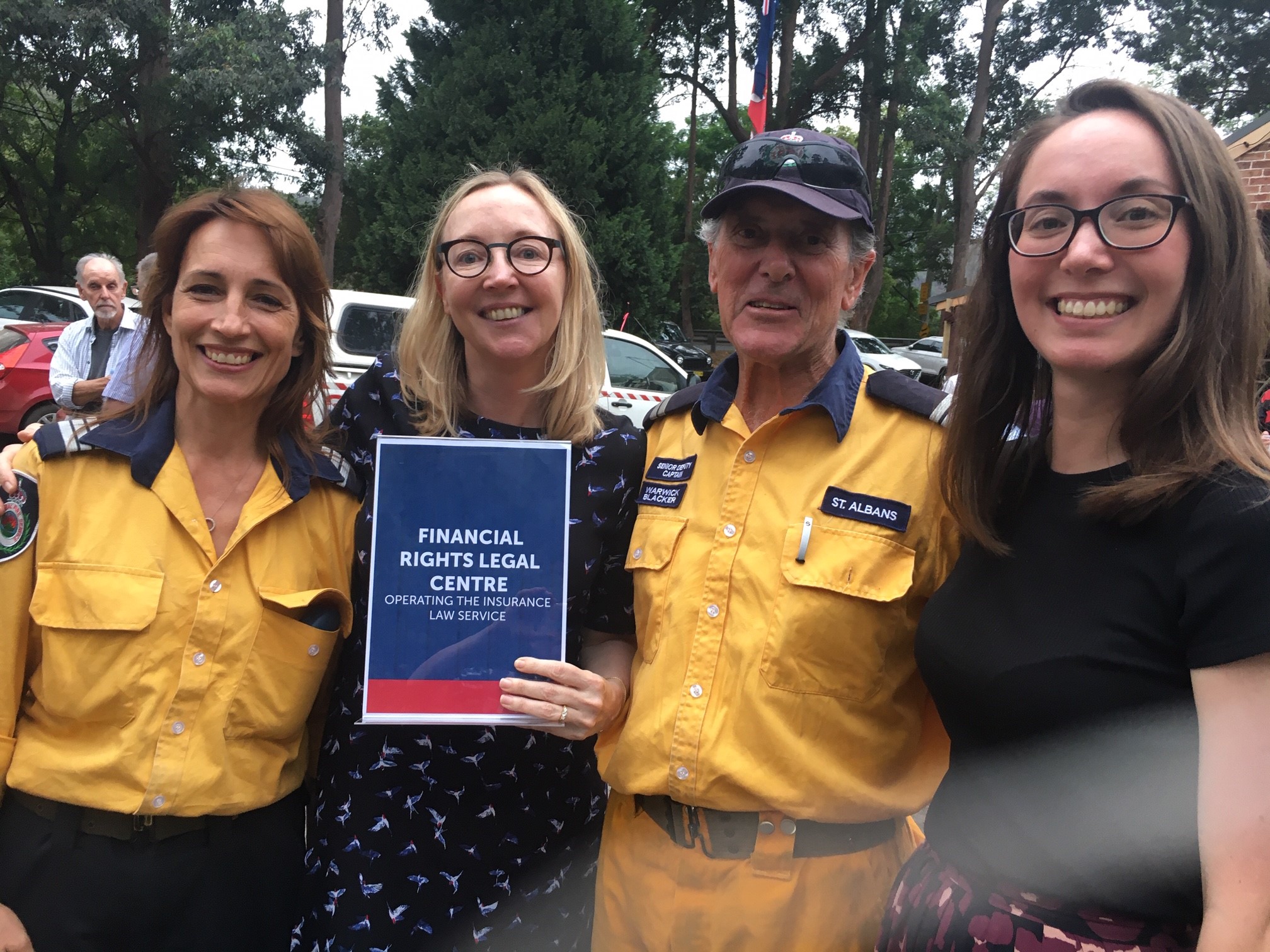 However, we have already spoken to at least one person whose sum insured is $300,000 less than the likely cost to rebuild. And we have spoken to many more people who have no cover for their outbuildings, tanks, or feed for their animals (but, not being primary producers, are not eligible for government assistance).

Others have no insurance at all.

And is it any wonder? Choosing insurance is a fraught task at the best of times. People are supposed to be able to effectively evaluate a range of market offerings with a multitude of seemingly minor differences, which could turn out to be crucially important at the time of a claim. Recent research by Monash University commissioned by the Financial Rights Legal Centre found that, even with simplified 20-page policy documents, or a Key Fact Sheet provided, a significant number of participants still chose the worst policy on offer.(1)

In the real world, policy documents are 80 pages or more, laid out completely differently depending on the insurer and brand, define terms differently, and sometimes comprise a range of confusing documents including supplementary Product Disclosure Statements, Guides, Excess booklets, and so on, all of which need to be cross-referenced to fully understand the limits of cover.

In the context of catastrophic weather events, people are also expected to understand the risks they are exposed to, something behavioural economists tell us most people do poorly. They then need to work out how much insurance they will need to rebuild (including clean-up and temporary accommodation). This includes considering inflated rebuild costs because of the possible need to comply with new building codes, as well as a potential scarcity of supplies and skilled labour, depending on how many households are affected. They also need to be able to afford the resulting premium, something that cannot be taken for granted as people negotiate many changing circumstances throughout their lives.

People are expected to manage all of the above with no particular expertise, amongst the demands of caring for children, managing their jobs, farms or businesses, dealing with their own health problems and perhaps those of dependents or elderly parents and life’s many other challenges.

It is more of a surprise that we sometimes get this right at all.

In the wake of the 2011 Queensland floods, the National Disaster Insurance Review recommended, among other things, the establishment of a national agency to coordinate flood risk information and management.(2) The agency would operate a system of premium discounts and a reinsurance facility guaranteed by government to existing dwellings, with a view to phasing out these measures over time. This was intended to have three main impacts:

The government failed to implement this recommendation. Instead, they opted to implement the lighter touch recommendations of standardising the definition of flood, and requiring insurers to publish a Key Fact Sheet to make it clearer what is and is not covered under an insurance policy. As a result, people are less likely to be caught unawares by a lack of flood cover, but in our experience many people have simply opted out of cover because it is unaffordable or because of their own assessment (right or wrong) that their risk of flooding is low.

In 2014/15, the Productivity Commission recommended an investment of $200 million in pre-disaster mitigation as part of its National Disaster Funding inquiry. Actual investment has fallen far short of this and remains a fraction of the amount spent on disaster response and recovery.

The Australian Competition and Consumer Commission’s Northern Australia Insurance Inquiry, announced in 2017 and with a second interim report in December 2019, recently made 28 recommendations about insurance. All 28 which are sensible and should be expedited, but are unlikely to be implemented for some time due to the significant amount of legislation required to meet the Federal Government’s Financial Services Royal Commission implementation commitments.(3) Treasury’s own examination of standardised definitions in insurance, and the ineffective standard cover regime, are also in hiatus for the same reason.

The ACCC inquiry, which is due to continue for another year, has so far not backed any form of subsidisation of insurance premiums in high-risk areas or a government-backed reinsurance pool which would have a similar effect. The inquiry argues that these measures would only mask risk, rather than incentivise real action to address those risks. In other words, if we mitigate the risks of extreme events, and change planning laws to stop people living in the highest risk locations, insurance premiums should automatically reduce and people will be able to afford suitable insurance. This is also the line taken by most insurers, but it is one that needs to be re-examined in the light of the recent back-to-back run of extreme weather events affecting large swathes of the most populated areas of the country.

Of course risk mitigation is essential, including addressing the root causes of climate change. However, is it realistic to mitigate all risk and is it fair to make individual property owners bear the cost of decades of unsustainable development? Are the goals of retreating from higher risk locations consistent with other public policy objectives like facilitating thriving cultural and economic hubs outside our major and increasingly crowded cities? How do we balance pricing (and therefore signaling) risk accurately with pooling risk, so that the cost is shared more fairly across the population? And perhaps most pertinent, do we want to continue to spend billions of public and private dollars after an extreme weather event to fill the gaps left by un-insurance and under-insurance, when we could probably spend those dollars more fruitfully pursuing sensible policies to both mitigate risk and improve our resilience when those risks become our lived experience?

Insurers have much to offer policy makers in terms of risk assessment, disaster preparedness planning, climate change modelling and adaptation. This input should be welcomed and heeded. It does not follow that this is enough, or that we should accept on faith that if governments pour dollars into mitigation, lower premiums will automatically follow, and people will develop an overnight awareness of the amount of the cover they need, and the ability and willingness to pay for it.

The upcoming Royal Commission should examine these questions, building on the work of previous inquiries. Whatever is recommended, we should not wait for the next extreme weather event to determine whether such measures have been implemented and effective.

While the establishment of the National Bushfire Recovery Agency is welcome, we need a well-resourced, independent organisation tasked with disaster prevention and resilience. This agency should coordinate all aspects of disaster preparedness and recovery, including monitoring:

All this should be done with a view to changing policy settings that prove ineffective.

The 2019/2020 bushfires have already been closely followed by extremely damaging hail, rain and wind. The Insurance Council of Australia has declared six catastrophes in five months. The latest crisis will not be the last, and the resilience of individuals and communities, and the generosity of strangers, will wear thinner every time. The stakes are too high to leave the issue of ensuring our communities have appropriate insurance cover to unrealistic notions of personal responsibility, financial literacy and the whims of the market.