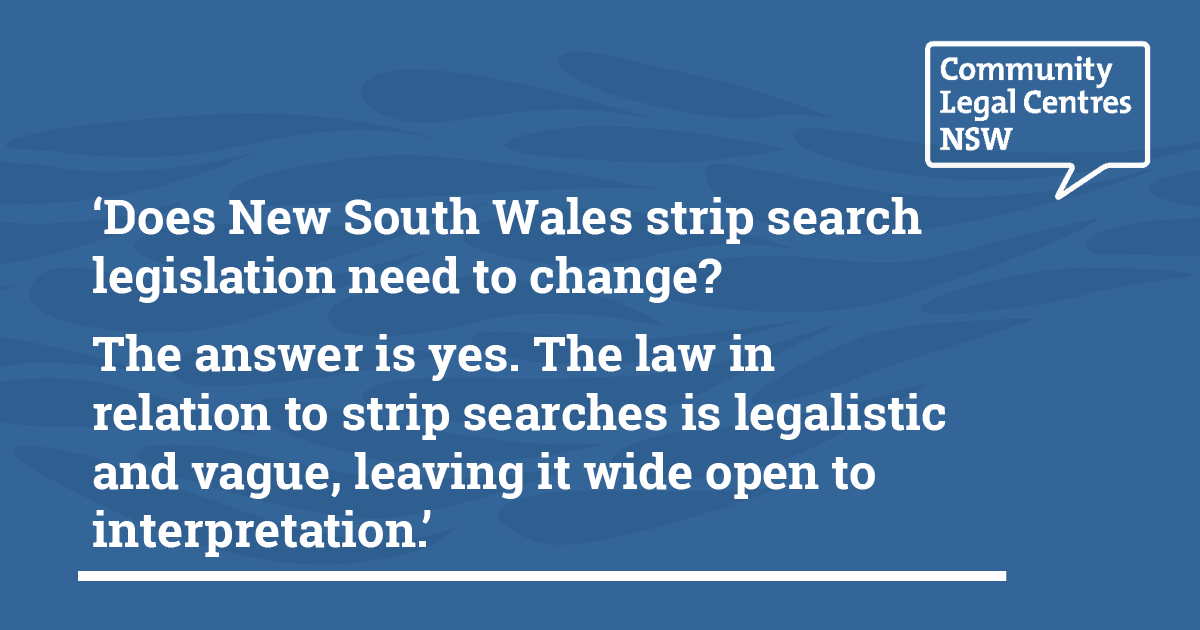 New South Wales has a strip-search problem. And now the evidence is in.

Some key findings outlined in the report include:

Some of the key report recommendations include:

We commissioned the report in response to an alarming increase in the number of people attending RLC’s statewide police powers service, as well as other legal services across New South Wales, after being forced to undergo invasive, full-body strip searches.

Our clients described humiliating, traumatic and often unlawful strip searches where, in the majority of cases, nothing unlawful was found. Even in the cases when an illegal item was found, it could have been easily have been located via a general search.

Additional data we obtained under freedom of information laws showed that, over a two-year period, nearly 300 minors (aged 10 to 17 years) had been the target of field strip searches in 2016-17 and 2017-18. Young adults aged between 18 and 25 were subjected to 4,011 strip searches in the same period, accounting for 41% of the total 9,891 searches across NSW.

Distressingly, these figures also showed that Aboriginal and Torres Strait Islander people were disproportionately bearing the brunt of this law, making up 10% of all strip searches conducted in New South Wales.

All this begs the question: does New South Wales strip search legislation need to change? The answer is yes. The law in relation to strip searches is legalistic and vague, leaving it wide open to interpretation.

The current legislation is so poorly worded that looking down a woman’s top at her breasts, or pulling out and looking down a young man’s pants to inspect his bottom or genitals may not even be considered a strip search. This is because the law refers to the ‘removal’ of clothing rather than “pulling out” or “looking into,” and fails to clearly define the actions that should constitute a strip search.

The law also states that police should only conduct a strip search when the officer suspects on reasonable grounds that circumstances make a strip search ‘necessary’, ‘serious’ and ‘urgent’. But the legislation fails to provide any guidance as to what these terms mean. This appears to allow police to catagorise all types of situations as ‘serious’ and ‘urgent’, including an indication by a sniffer dog.

The recent District Court case of Attalla v State of NSW [2018] NSWDC 190 highlights these problems. In this case, Mr Attalla was sitting on a church wall at 3.30am, when three police officers confronted him and commenced a search on suspicion of possession of a prohibited drug. Mr Attalla refused to submit to the search. He was then placed under arrest for hindering police, put into a wrist lock, handcuffed and taken back to Kings Cross Police Station.

At the station, Mr Attalla was subjected to a full-body strip search and ordered to lift his genitalia and squat. Police found nothing illegal. Mr Attalla was subsequently awarded over $100,000 in damages when the search was deemed by the judge to be unlawful and unjustified.

The problems with the current law cannot just be confined to the lack of clear guidance or definitions, but also to the disturbing failure of the law to reflect essential child protection and harm minimisation principles.

Strip search law is the only law that allows a police officer to legally order a child as young as 10 to take off all their clothes in a foreign environment, and in some circumstances, direct that child to squat naked and cough.

It’s a law that fails to consider that some people undergoing a strip search may have previously experienced sexual assault or domestic abuse, or faced suicidal thoughts or other forms of trauma. Subjecting someone to strip search can retrigger these traumas and create new ones.

All this being said, our report acknowledges that there will always be circumstances where a strip search will be warranted. These circumstances may include when police have reasonable grounds to believe there is an immediate risk to personal safety or an immediate destruction of evidence.

The reforms our report proposes aim to ensure that police will still have the powers they need – but most importantly – that the law functions as intended: a strip search should never be a first port of call, but a legally-justified last resort.