On the 30th Anniversary of the Royal Commission into Aboriginal Deaths in Custody (RCIADIC), Community Legal Centres NSW stands in solidarity with the families of Aboriginal people who have died in custody. We support First Nations peoples’ repeated demands for systemic change. 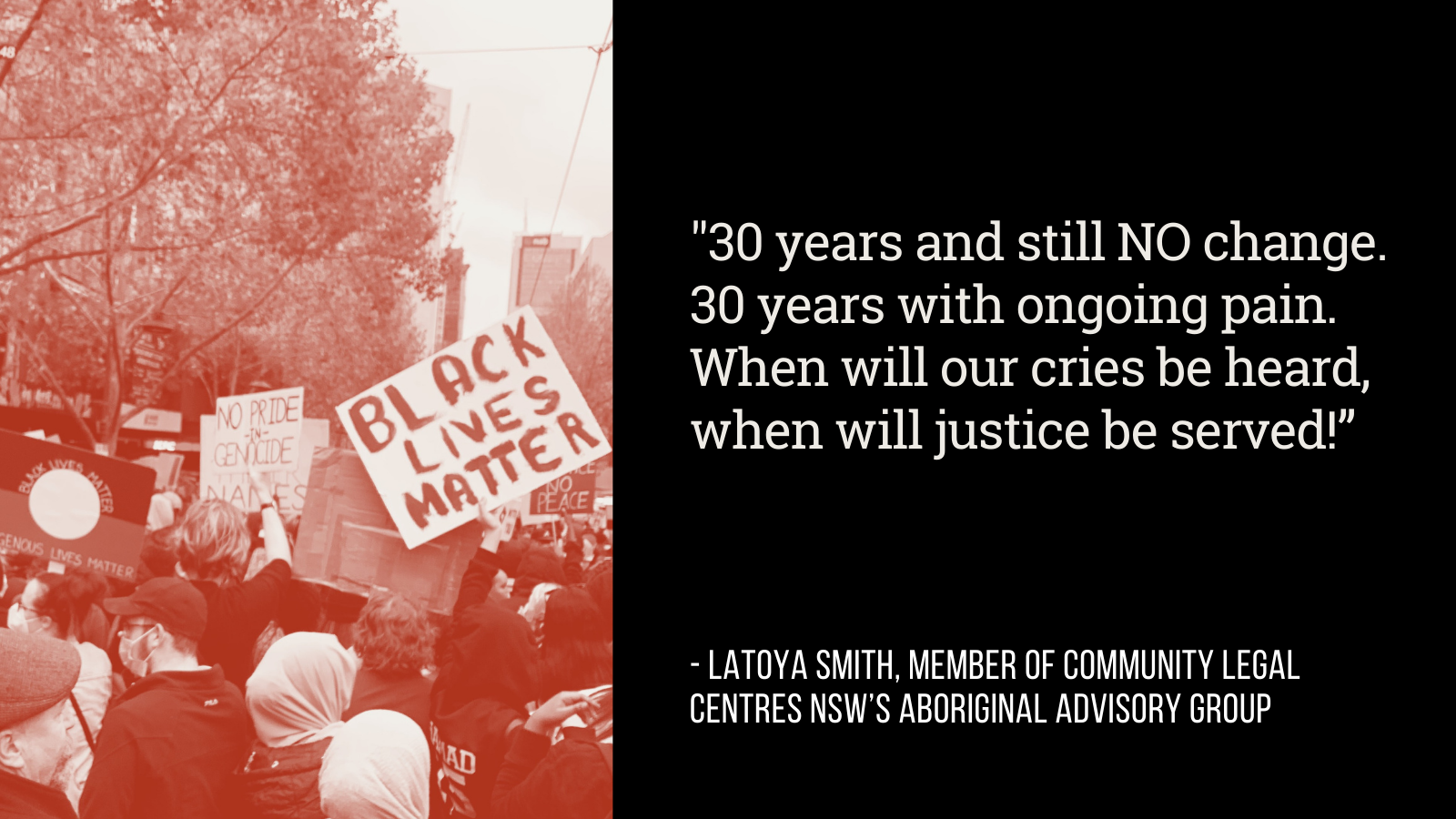 “30 years and still NO change. 30 years with ongoing pain. When will our cries be heard, when will justice be served!” – Latoya Smith, Aboriginal Engagement Officer and member of Community Legal Centres NSW’s Aboriginal Advisory Group.

Since the beginning of March this year, five Aboriginal people have died in custody. Our hearts go out to all the families grieving for their loved ones, whose ongoing fights for justice are a testament to their love and strength.

“We continue to stand shocked but united in our grief. The passing of time cannot be silenced, as we are even more determined to continue to proactively seek urgent, overdue, systemic reform within our legal system,” said Solicitor Brian Attard, Community Legal Centres NSW’s Aboriginal Advisory Group Board Representative.

"At least 474 Aboriginal people have died in custody since 1991 because of continued government inaction. It is a grave injustice that too many families have to live with every day as they mourn the lives of their loved ones,” said Executive Director of Community Legal Centres NSW Tim Leach.

There is nothing inevitable about Aboriginal deaths in custody – each death is unnatural, devastating and heartbreaking. The RCIADIC provided a blueprint for change. For far too long state and federal governments have held inquiry after inquiry and cumulatively failed to fully implement the report’s recommendations. Three decades on, we call for an immediate end to this deadly government inaction.

“There have been decades of ideas and research to reduce over-imprisonment of our Mob, from the Royal Commission into Aboriginal deaths in custody to justice reinvestment strategies. Yet to press for more prisons and arrests was always a compounding shame for our justice system,” said Solicitor Mark Holden, Member of Community Legal Centres NSW’s Aboriginal Advisory Group.

We strongly support the Aboriginal Legal Service NSW/ACT and the National Aboriginal and Torres Strait Islander Legal Services in calling for urgent, systematic change. This includes independent investigations into every death in custody, and full implementation of the RCIADIC’s 339 recommendations.

Any serious effort to end Aboriginal deaths in custody must involve reducing the rates of imprisonment of Aboriginal people. New South Wales’ prison capacity has grown steadily since 2016, with Australia’s largest prison opening near Grafton in 2020. Aboriginal and Torres Strait Islander people in Australia are imprisoned at the highest rate of any people in the world, and at a rate 16 times higher than non-Indigenous Australians. These facts are nothing to celebrate.

“When it comes to ending deaths in custody, we need bold policy and legislative change. The state government needs to overhaul the harmful, and often fatal, over-policing and over-imprisonment of Aboriginal people,” said Arlia Fleming, Chairperson of Community Legal Centres NSW.

In solidarity with the families fighting for an end to Aboriginal deaths in custody, Community Legal Centres NSW calls upon the NSW and Federal Governments to:

On this day and every day, we support the right of all people to protest the continuing injustice experienced by Aboriginal people.

We call on our colleagues in the legal profession to refuse to be silent on this tragic and historic day, and to support families, Aboriginal organisations and grassroots movements in demanding an end to Aboriginal deaths in custody.