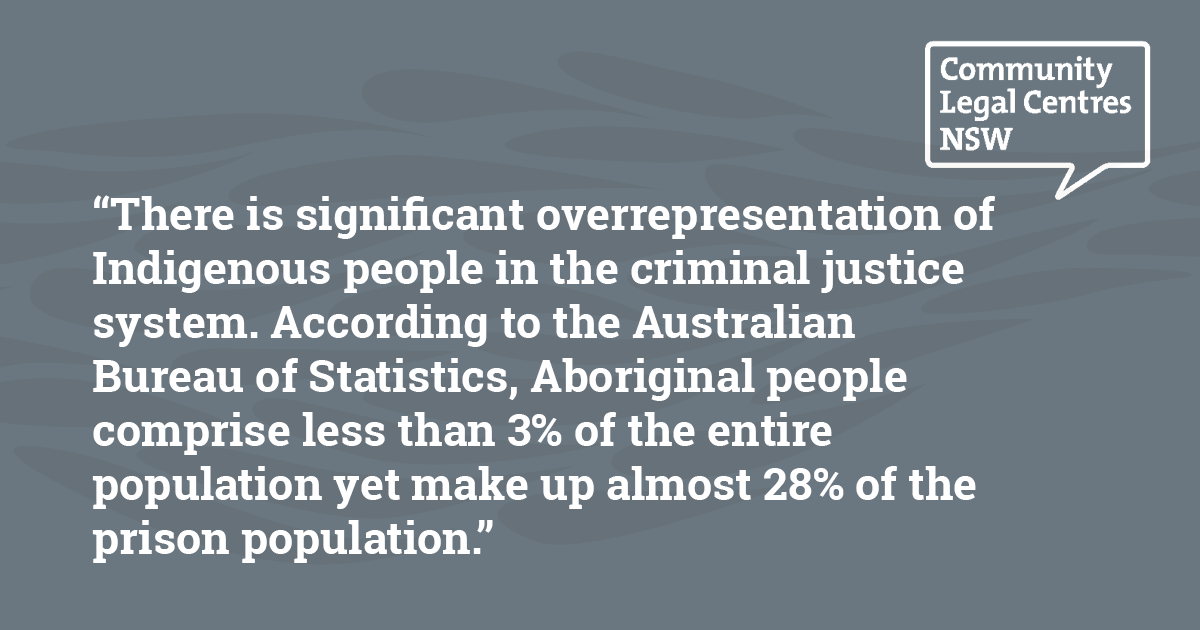 There are many legal and social barriers currently effecting Aboriginal and Torres Strait Islander communities. One of the most pressing is the over-representation of Aboriginal and Torres Strait Islander peoples in our prisons. The Australian Law Reform Commission was asked to examine the factors that contribute to this and to consider law reform that would address this crisis.

Community Legal Centres NSW and the CLCNSW Aboriginal Advisory Group have identified these Indigenous incarceration rates as a significant issue in Indigenous communities and the criminal justice system.

There is significant overrepresentation of Indigenous people in the criminal justice system. According to the Australian Bureau of Statistics, Aboriginal people comprise less than 3% of the entire population yet make up almost 28% of the prison population.(1) Systematic changes are crucial in addressing this issue to close the gap in incarceration rates and ensure that there is greater equality within the criminal justice system.

The CLCNSW Aboriginal Advisory Group is comprised of Aboriginal staff who work in community legal centres across NSW. These staff members were asked: ‘What systematic changes need to be made to stop our mobs from getting caught up in the criminal justice system?’. They commented on a range of issues involved in Indigenous incarceration rates, which has led to a range of recommendations listed below.

The CLCNSW Aboriginal Legal Access Program involves Aboriginal Legal Access Workers and operates across the entire state. It seeks to provide better access to legal services and increased awareness of legal rights for Aboriginal people. The Program works to increase the effectiveness of community legal centres and promote the role of cultural safety in non-Aboriginal legal assistance services.

The recommendations are set out in full below.

A copy of our full submission is available here.