Enshrining our rights in law 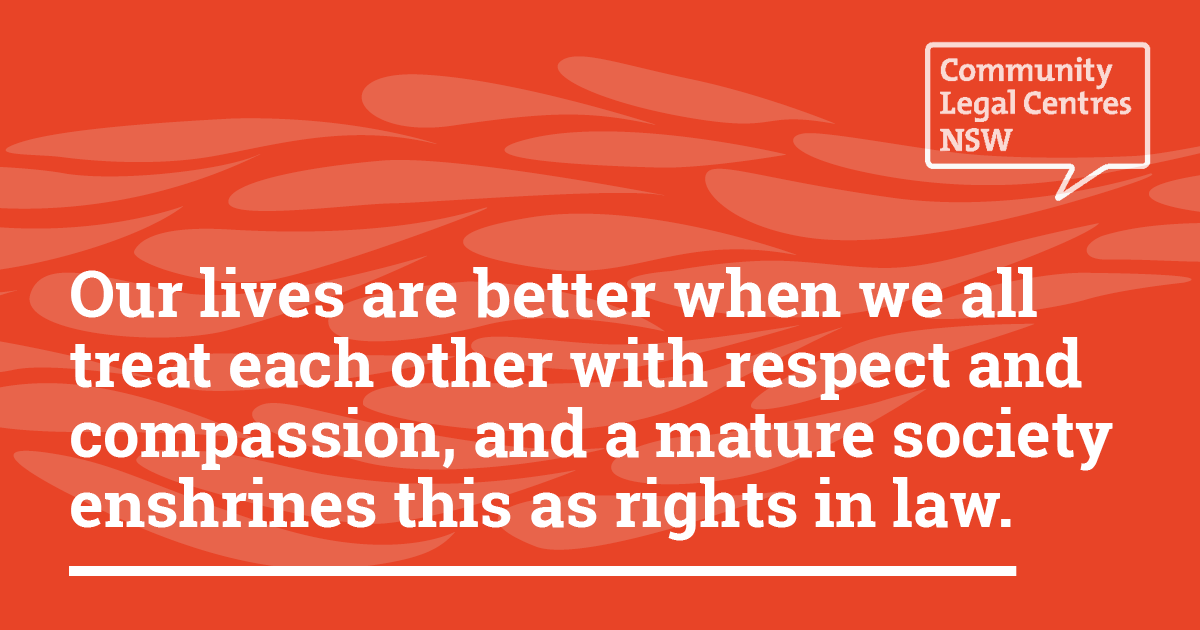 Residents of NSW believe in a fair go for everyone. Human rights are universal and apply without distinction. This means that human rights belong to everybody and can’t be taken away because of sex, race, age, sexual orientation, disability and other characteristics.

Human rights are not comprehensively protected in NSW or at the Commonwealth level. Australia is a party to the core international human rights treaties, which means Australia has an obligation to protect and promote the human rights contained in these treaties. Australia remains the only Western democracy without a Bill or Charter of Rights. The Australian Constitution and common law offer only limited rights protection.

NSW could address this issue by comprehensively enshrining human rights protections in law.

NSW law currently adopts a bottom-up approach, addressing the protection of each right individually. This is an unsatisfactory approach in which some fundamental rights are adequately protected whilst others are not protected at all. Community Legal Centres NSW believes that this creates too much ambiguity and leaves too many gaps.

The complex interactions of the various sources of law also make it difficult to concisely articulate how these legal rights work. This hinders the promotion of respect for fundamental human rights. Community Legal Centres NSW believes that it would assist ordinary Australians’ understanding of their rights and responsibilities to set these out in one single document. The piecemeal protection of human rights in NSW means that individuals often have no access to effective remedies when their rights are breached.

A Human Rights Act for NSW would solve these issues.

Pooja is a 30-year-old mother of two experiencing domestic violence. Her partner has physically and sexually abused her. He has also taken out loans in her name by forging her signature. Pooja doesn’t work, doesn’t receive any Centrelink benefits and has no access to finances. Pooja wants to leave the relationship but has nowhere else to live. She’s tried to get access to public housing but has been told it will be a long wait. Many women’s refuges won’t take her because she has a dog. She has nowhere to go so she can’t leave.

If the right to housing and security of person was protected under a human rights act, Pooja could try to access public housing through the courts.

Fiona enrolled her 5-year-old son, Peter, at the local childcare centre. Fiona did not tell the centre that Peter has ADHD. The centre complained that Peter was acting up and was violent to some of the teachers. Fiona was told Peter was being expelled from the centre. Fiona then told the centre Peter had ADHD and requested that he be re-enrolled, and if required, be placed under the supervision of a special teacher who had training in working with children with disabilities. The centre refused to re-enrol Peter, stating that they couldn’t accommodate children with ADHD at the centre.

If the right to education was protected under a Human Rights Act, Fiona would have a better chance of negotiating with the childcare centre and pursuing the matter through the courts if required.

Ali is a young Muslim man in prison. He was given external leave to undertake studies at an educational institution. At the educational institution, Ali regularly prayed in outdoor areas. He was told that he was not allowed to pray there. When he continued to pray, Ali’s education leave was cancelled. He was not allowed to continue his studies. This caused significant distress to Ali and his family.

We advised Ali that he would not be able to successfully make a discrimination complaint, as the law does not protect a person from discrimination on the basis of their religion.

If there was a Human Rights Act in NSW, Ali may have been able to claim the policy breached his right to freedom of religion and right to education.

Currently, human rights in Australia are protected through a myriad of federal, state and territory laws, policies and practices, and through the common law. Community Legal Centres NSW is concerned that the current legal framework makes it difficult for ordinary Australians to identify their rights and freedoms, and to understand the extent to which their rights are recognised at law. The complex interactions of the various sources of law also make it difficult to concisely articulate how these legal rights work.

A Human Rights Act would provide an avenue for vulnerable people to hold government accountable and challenge the validity of government action and policy where it breaches human rights standards.