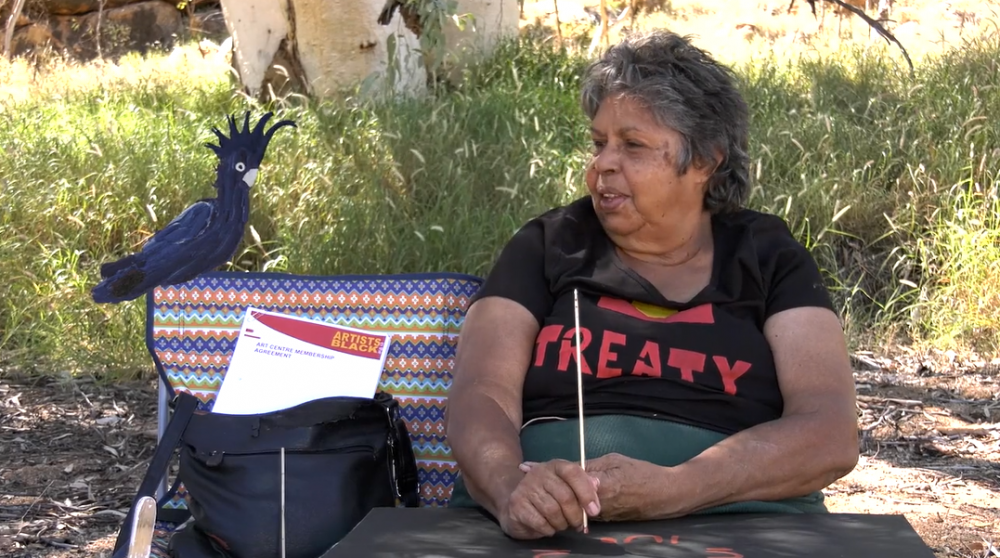 Screenshot from video with Pat Ansell-Dodds as Aunty Doreen and cockatoo based on the painting ‘Untitled’ 2011 by Kukula McDonald, courtesy of Bindi Mwerre Anthurre Artists (Lifestyle Solutions Pty. Ltd.).

Artists in the Black is a service of Arts Law, dedicated to providing legal assistance and advice to Australia’s Aboriginal and Torres Strait Islander artists and communities. In all, over 50% of Arts Law's education delivery and 35% of our legal advice and services falls under Artists in the Black.

Artists in the Black often works with art centres to deliver legal services directly to their artists. However, a large group of Aboriginal artists in Alice Springs who don’t work through a local art centre, really miss out on accessing legal services.  These artists are often in Alice Springs from outlying communities – possibly for health or family reasons – and are vulnerable to “carpet baggers” or dodgy dealers. They often have little understanding of their rights.

Arts Law was approached by a Federal Arts funder to help get the message out to this group of artists.

The final animations covering copyright, contracts, Indigenous Cultural Intellectual Property (ICIP), wills, moral rights and resale royalties were shown on screen at Todd Mall, Alice Springs and distributed to Aboriginal services in Alice Springs including the Aboriginal Legal Service (ALS) and Aboriginal Medical Services (AMS). They are also available on the Arts Law website and are a valuable resource for artists across Australia and are used extensively in our education program.

Aboriginal and Torres Strait Islander artists and arts centres represent a big client group for Arts Law. The Artist and Art Centre Agreement outlines the fundamental relationship between the artists and their arts centre explaining the obligations on each party. Both Arts Law and the Indigenous Art Code advocate the use of written agreements. Unfortunately many art centres do not have written agreements in place with their artists. Further complicating matters, many artists have English as a second or third language and levels of literacy are low. Arts Law’s Artist and Art Centre Agreement is simple, with pictograms, but is still too difficult for many artists.

A survey of art centres revealed there was a real need and interest in such a video and over 50 languages were suggested. Due to funding restraints we were able to produce the video in seven of the most widely spoken languages. With an Innovation grant from the Attorney General’s Department we again worked with CAAMA to develop the video and licensed a painting by artist Kukula McDonald to be animated.

Arts Law has since received additional funding to translate and produce the video in an additional 10 Aboriginal and Torres Strait Islander languages – a total of 17 languages, plus English.