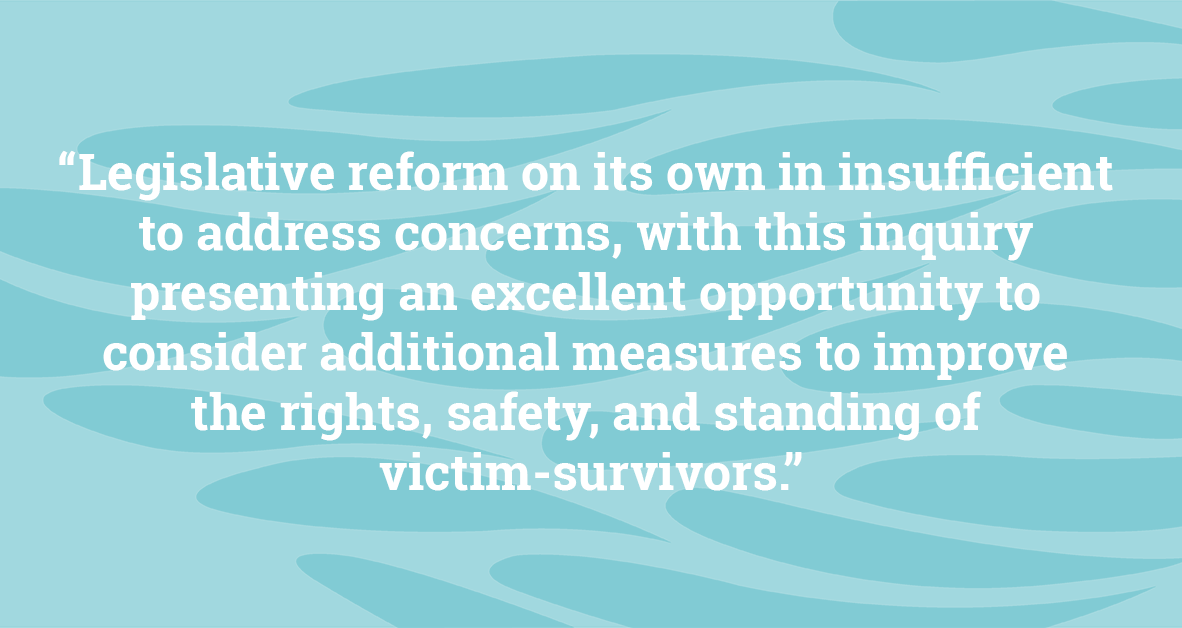 Improving access to justice for victim-survivors of sexual assault and eradicating discriminatory structural power imbalances that allow offenders to commit sexual assault with no repercussions are at the heart of twelve important recommendations made by Community Legal Centres NSW to the current NSW Law Reform Commission inquiry into consent in relation to sexual offences.

Importantly, Community Legal Centres NSW rejects the position advanced by the NSW Bar Association to relax sexual consent laws in NSW so that a person who had an unreasonable belief their victim was consenting to sex would no longer be guilty of a crime. Such a suggestion came after the NSW District Court acquitted Luke Lazarus in 2017 of the rape of an 18-year-old woman in an alleyway for holding an honest belief that the victim-survivor consented to the sexual activity.

We believe that the Lazarus decision highlights the need for consent laws to be simplified and clarified, as well as the adoption of appropriate non-legislative measures to be taken. Legislative reform on its own in insufficient to address concerns, with this inquiry presenting an excellent opportunity to consider additional measures to improve the rights, safety, and standing of victim-survivors.

The recommendations were developed in consultation with other legal centres working within the sexual and domestic and family violence field.

A summary of the recommendations appears below. View our full submission to the inquiry here.

1. Changing NSW consent laws to clarify that a person only consents to sexual activity if they actively communicate consent

NSW’s consent laws be changed to clarify that consent can only be granted if a person says or does something to communicate consent. This would make it extremely difficult for fact-finders to conclude that passivity during a sex act constitutes consent for that act. This is needed because not every victim-survivor tries to resist rape through fighting and screaming. A large number of victim-survivors freeze in fear and become passive during sexual attacks.

2. Reframing the factors that nullify consent

Currently, NSW consent law lists a set of factors “negating” consent. Such wording implies that consent was automatically given to the accused, increasing the likelihood for fact-finders to make unjust determinations against victim-survivors. The language ‘factors negating consent’ should be replaced with ‘circumstances in which a person does not consent’.

The law should be changed to make it clear that a person does not consent to sexual intercourse if they agree to have sex because of fear of harm. This recommendation would ensure that the law captures domestic violence situations by recognising that a person may feel forced into sexual activity due to prolonged exposure to physical or emotional abuse by a spouse or partner.

The NSW Bar Association has recommended relaxing NSW’s consent laws so that a person who had an unreasonable belief their victim was consenting to sex would not be held criminally liable. In the event that this proposal fails, the NSW Bar Association believes that a less serious offence with a lower maximum penalty of 5 years should be implemented to address those situations in which a perpetrator honestly believed there to be consent.

5. Implementing comprehensive education campaigns for legal professionals and the public

Comprehensive community education addressing archaic cultural norms that govern sexual relationship is critical to reducing the incidence of sexual violence in the community and improving safety and access to justice for victims-survivors.

Community-wide programs would include, for example, education around consent, the impracts of sexual violence, and healthy relationships for primary and secondary school students.

In addition, the legal practitioners — including the police, barristers, prosecutors and judicial officers — need to be educated about the experience of sexual violence and the most effective ways to interact with victim-survivors. Specialist education for legal practitioners should include specific programs that address the experiences and impacts of sexual violence for Aboriginal and Torres Strait Islander people.

A specialist sexual violence court that brings together specialist personnel to better address the complexities of the law of consent would improve the responsiveness of the criminal justice system to victim-survivors.

Such a court would endeavour to provide physical facilities, such as separate waiting rooms, to ensure that victim-survivors feel comfortable. It would also reinforce the message that sexual assaults are taken seriously under criminal law.

Improved court and social supports for victim-survivors should be implemented. The provision of audio-visual link facilities and safe rooms in courts for complainants to give evidence would reduce the intimidation that victim-survivors feel throughout the legal process and ensure that the value of the evidence they give is not diminished.