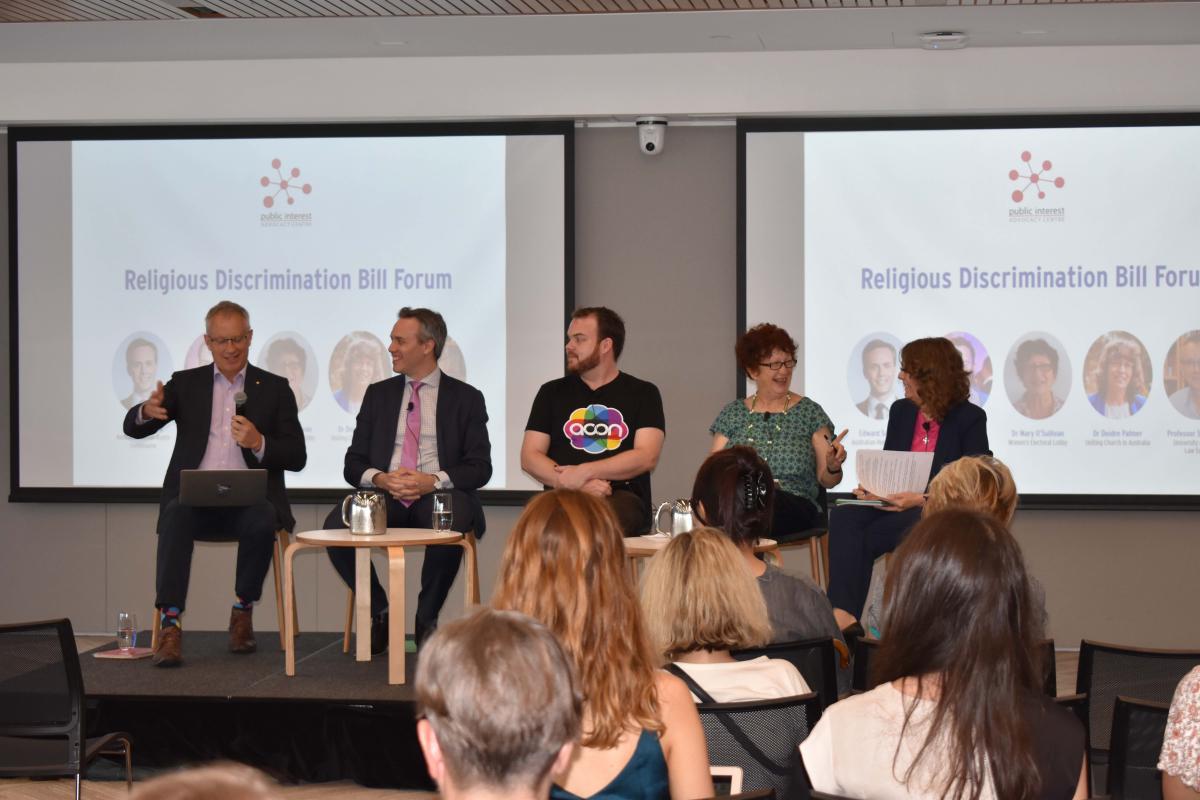 Serious problems with the Government’s Second Exposure Draft Religious Discrimination Bill were explored by speakers from a range of perspective at a forum by the Public Interest Advocacy Centre at Gilbert + Tobin on Friday 24 January.

The keynote speaker was Human Rights Commissioner Ed Santow, who expressed concerns about some of the ‘unique, even radical’ aspects of the proposed legislation.

This includes the expansive exceptions it grants to religious organisations to discriminate in ways that would otherwise be prohibited. From the Lawyer’s Weekly report of the event:

“It undercuts protections against religious discrimination, particularly in sections such as employment and the provision of goods and services. In other words, a significant portion of the bill isn’t about prohibiting religious discrimination, it does something that is the exact opposite of that,” Mr Santow said, adding that the bill would give ‘licence’ to certain parties to engage in discriminator conduct based on their beliefs.

The Commissioner delivered strong criticisms of the Bill, saying:

“We need to consider whether the bill’s problems are so severe they taint the bill as a whole. For me, the short answer is yes. In my view, certain elements of the bill are so problematic that the bill should not proceed unless those problems are addressed.”

Dr Mary O’Sullivan from the Women’s Electoral Lobby NSW highlighted the dangers of clause 8(6) and (7), which grant doctors, nurses, pharmacists and other health practitioners increased legal powers to conscientiously object to providing particular health services. She observed that the practical effect of these provisions will be to seriously jeopardise women’s health around the country, especially their ability to access reproductive and sexual health services.

Brandon Bear from ACON emphasised the threat posed by the conscientious objection provisions to LGBTIQ Australians, including the potential for trans and gender diverse people to be denied access to hormone therapy, and for gay and bisexual men to be refused PEP and PrEP for the prevention of HIV. He also raised the adverse impact of discriminatory statements of belief on vulnerable populations, including women, LGBTIQ people and people with disability.

Dr Deirdre Palmer from the Uniting Church then spoke from a faith perspective, and challenged the core nature of the Government’s legislation. While supporting the right of all people to be protected against discrimination, she queried whether that would be the outcome of the Government’s Draft Bill, especially in relation to its ‘statement of belief’ provisions. As reported in the Sydney Morning Herald:

“To be a welcoming, inclusive, multi-faith and multi-cultural society, it is important that people are able to freely practice religion without fear. But privileging statements of religious belief at the expense of other people’s dignity and wellbeing is not something we support. Christians in Australia are not persecuted. In Australia, churches aren’t victims. To cultivate some kind of victim status is disingenuous.”

There followed a wide-ranging discussion about the various problems contained in the Religious Discrimination Bill, with an emerging consensus that this legislation cannot be passed in its current form.

Submissions on the draft Bill closed on Friday 31 January, with the Public Interest Advocacy Centre’s submission, endorsed by Community Legal Centres NSW, also calling for the Bill not to proceed as currently drafted.

At this stage, it is expected that the Government will introduce its final version into Parliament in February or March. Its fate will then be up to the Senate, with all eyes on the ALP, Greens, Centre Alliance and Tasmanian Senator Jacqui Lambie.

PIAC gratefully acknowledges the support of Gilbert + Tobin in hosting this forum.